“This was our first opportunity to show all the stakeholders what we have been working on for the past two years,” said NSWC PCD RaDER Project Engineer Jeff Dinges. “It is extremely exciting to see a concept demonstrated two years after the project was conceptualized.”

The RaDER concept was developed at NSWC PCD and initially funded as a Naval Innovative Science and Engineering (NISE) effort for 2013. The RaDER is designed to provide a low-cost, autonomous, modular-vehicle capability for fielding numerous explosive hazard defeat (EHD) and counter-tactical surveillance and targeting (CST) mission packages.

“We were able to develop requirements with a target transition organization during the engineering process,” said Dinges. “This team effort between MCSC, the PdM ES and NSWC PCD helped refine the requirements for the platform and future mission capabilities.”

As fiscal year 2013 was coming to an end, MCSC, PdM ES funded the RaDER effort to allow for the integration of the Office of Naval Research (ONR) Expeditionary Maneuver Warfare and Combating Terrorism Department (Code 30) advanced ground system autonomy technology onto the RaDER platform.

As fiscal year 2014 began, the NSWC PCD team was in the fabrication stages of the project.

“Many long hours were spent completing the mechanical and electrical design”, said Dustin Bride, NSWC PCD lead mechanical engineer. “We performed all the modeling and analysis on the computer before we started cutting metal. We made every effort to minimize fabrication time and cost through the process.”

Once the mechanical design was complete, NSWC PCD and SSC Pacific teams worked to integrate the autonomy kit onto the vehicle.

“The RaDER is a low-cost platform with an autonomous navigation package,” said Dinges. “The platform uses a number of commercial-off-the-shelf (COTS) parts to keep costs low while also decreasing the logistics footprint. RaDER has a unique chassis design to meet multi-mode transportation, quick deployment and modular mission capability requirements.”

According to Dinges, some of these missions include route reconnaissance and clearance detection, proofing and situational awareness.

“We analyzed over 13 different mission packages to integrate onto RaDER,” said Dinges. “Even with a modular mission capability platform producing 750 watts of sensor power, RaDER maintains an all-terrain capability with four-wheel drive and a fuel-efficient three-cylinder diesel capable of over 150 miles of range.”

Although RaDER development is still underway, Joe Klocek indicated he would prefer to get the platform in front of the Marines for their feedback.

“I certainly see a need for this type of system,” said Klocek. “It’s gone from concept to reality in a short period of time. We need to continue the development of the RaDER and let the operating forces utilize the system in a tactical environment to help generate the concept of operations for this unique capability.” 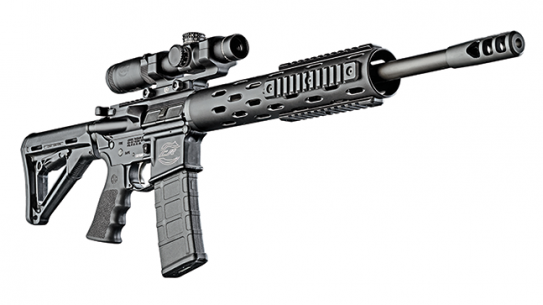 Colt's CRB-16RR in 300 Blackout is a fast-handling competition AR takes on the street...