We all remember playing with Nerf guns when we were kids. Those things were awesome, and we had a blast shooting them, but eventually we moved on to other things. Maybe we shouldn’t have. Look, we’re admittedly out of touch when it comes to toy gun innovation, but lately the Hasbro brand seems to seriously be stepping things up a notch. Say hello to the Nemesis MXVII-10K.

Part of Nerf’s Rival blaster line, the fully-automatic Nemesis MXVII-10K fires tiny foam balls at speeds of up to 70 mph and at around 50 feet away. This bad boy operates on a flywheel system, which means that the wheels inside the gun grab the foam balls and fire them out of the barrel. It features a removable hopper capable of holding up to 100 rounds, which Popular Mechanics says is more than twice the capacity of the Nerf Rival Khaos blaster that holds 40 rounds in its magazines. The hopper opens up at the top, so you can just keep dropping in foam balls while you’re firing. This blaster also comes with ambidextrous safeties and flip-up front and rear sights.

The Nemesis MXVII-10K is powered by six D-size batteries, or one of Nerf’s rechargeable battery packs. Both options are housed in the gun’s huge stock. When it’s fully charged and loaded, it can fire continuously for almost 25 seconds, according to the video above. It’s due out this Fall and it’ll retail for around $100.

Don’t judge us, but we’re seriously considering stocking up on these for our next holiday party… 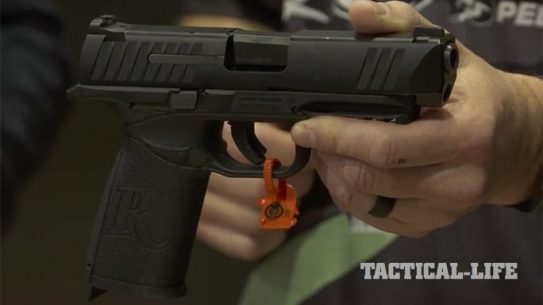 Remington has unveiled its first pistol in the crowded striker-fired polymer market, the RP9,...