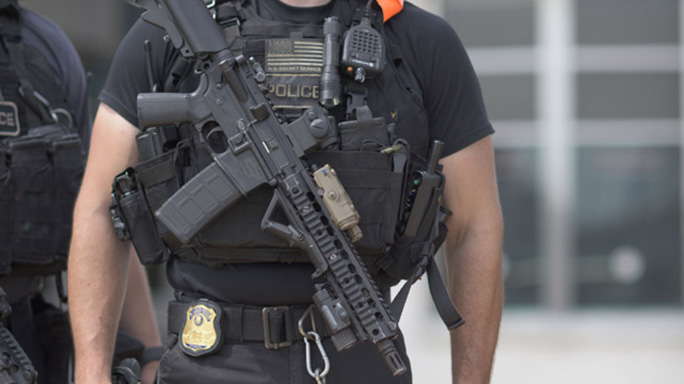 The United States Secret Service is looking for a new 5.56x45mm rifle. Soldier Systems reports that the Secret Service has issued a pre-solicitation notice calling for an IDIQ (Indefinite-Delivery, Indefinite-Quantity) contract over a period of five years, with the award expected to be handed out in fiscal year 2018.

The requirements for the new Secret Service rifle are many, but, essentially, they want an ambidextrous rifle with full- and semi-auto capability for use in all environmental conditions, including when “maximum concealment” is a must. All the external parts of the weapon should have a “dark subdued, rust/corrosion resistant finish” which is “unaffected by commercially available gun cleaning solvents, such as Simple Green, used in heated ultrasonic cleaning tanks.” Flaking, peeling and blotching of the finish won’t be accepted.

Below is a snapshot of the official Draft Statement of Requirements detailing what the Secret Service looking for. You can read it in full at fbo.gov.

The weapon shall utilize a direct-impingement gas-operated system or a short- stroke gas piston system.

The barrel shall have a minimum service life of 15,000 rounds.

Barrel service life is defined as a not exceeding 5 Minutes-of-Angle (MOA) and exhibiting no more than 125 ft/sec decrease in velocity (in accordance with USSS velocity testing procedures), with observance of offeror’s submitted maintenance protocols.

The muzzle of the barrel should bear a thread size of 1⁄2” x 28 tpi, with shoulder geometry of 90 degrees.

The muzzle should be equipped with a flash hider device, installed with shims as necessary.

Crush washers are not acceptable.

The weapon shall be selective fire, i.e. semi-automatic and full automatic. A “burst limiter” in the full-automatic mode is not acceptable.

The fire control selector shall be ambidextrous in design, and be a single lever paddle mounted on the side of the receiver, adjacent to the rear pistol grip, thereby not requiring the shooter to significantly break their firing grip when actuating.

The trigger pull shall not measure less than 4.0 pounds, nor more than 6.5 pounds, regardless if the fire selector is set on semi or full-automatic fire.

The trigger configuration shall be two-stage with no adjustment screws or set screws.

The lower receiver shall have a permanently affixed plate, label, or laser- etching, displaying a QR code or barcode, readable via commercially-available optical reader. This code shall be embedded with information specific to the host firearm, including (but not limited to) make, model/variant, and unique serial number.

The weapon shall be equipped with a Mil-Std-1913 Picatinny attachment rail on the top of the receiver for mounting of optics, iron sights, lasers, etc.

The weapon shall have a modular free-floating handguard assembly measuring no less than 9.0 inches of functional/configurable railspace (measured along the 6:00 o’clock position of the rail).

When utilized, the front/rear ‘backup’ sights shall be viewable through an Aimpoint Model T2 while mounted on a suitable optic-specific commercially available sight mount.

The weapon shall be supplied with means to mount a sling to, at minimum, the rear area of the receiver and the handguard, via quick-detach sling swivel. All sling mounting/attachment points will be required to be rotation-limited (4-position) quick-detach cups, to allow interface with quick-detach push button swivels. 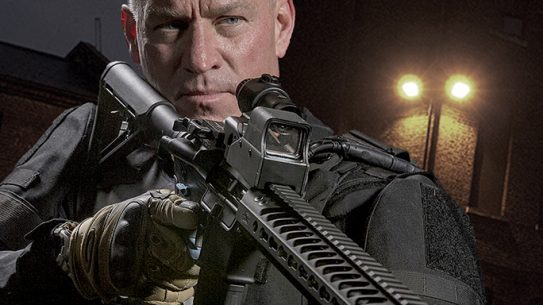 Designed to be mounted behind a Sightmark reflex or red-dot sight, the XT-3 Magnifier...