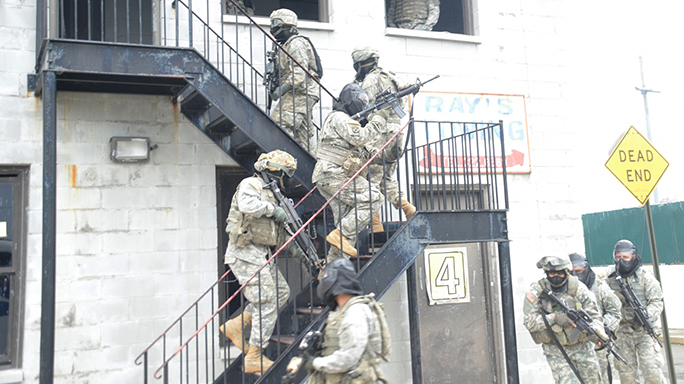 Nieves, a Staten Island resident, and his Soldiers were among 120 members of Company A, 1st Battalion 69th Infantry, who trained at the police department’s unique training location to prepare for a deployment to the Army’s Joint Readiness Training Center, or JRTC, on Fort Polk, Louisiana, later this year. The training filled their regular January drill weekend.

“Two separate buildings, complete with an MTA [Metropolitan Transportation Authority] bus, cars and stores, provided at the urban training center allow these Soldiers to practice and refine skills that can easily be used for an upcoming deployment,” explained Staff Sgt. Jesus Rodriguez, one of the company’s non-commissioned officers.

Located on Rodman’s Neck, an area of New York’s borough of the Bronx, which juts out into Long Island Sound, the 54-acre facility hosts a firing range, classrooms and a simulated city block used for police practical-training exercises.

The location is ideal for members of Company A to train at because it is relatively close to the unit’s, home base at Lexington Avenue Armory in Manhattan, said Capt. Jake Siegler, a New York city resident and the company commander.

The wars in Iraq and Afghanistan have made it clear that Soldiers need to frequently train in mock villages or towns to prepare for battle before they deploy, Siegler said.

“Overall, what should take place here is three platoons that are trained and equipped to clear these buildings while maintaining safety, overwatch and tactical proficiency in a timely manner,” Siegler said. “It is very important that we take the training seriously and are properly validated before our JRTC rotation,” he added.

The 1st Battalion, 69th Infantry will deploy to Fort Polk in July along with other elements of the New York Army National Guard’s 27th Infantry Brigade Combat Team for a three week exercise.

The Soldiers ran through room clearing and other drills before splitting up into a friendly force and an opposing force and running through the exercises against each other.

The opposing force Soldiers were equipped with New York Police Department training helmets to easily differentiate themselves from the friendly forces.

Phrases like “get behind cover,” “get your stack, advance” and “assault through” echoed across the training area as the Soldiers – who are financiers, cops, emergency workers, teachers and even a newspaper reporter – ran through their exercises.

Even as rain blew in off Long Island Sound the Soldiers kept moving.

“You have a lot of experience here with our combat vets teaching our new comers the complexities of warfare. Things like proper stacks, maneuvers, cover and concealment, and ACE [ammo, casualties, equipment] reports must be developed,” said Spc. Steven Gomez, a New York resident.

“This is the fun stuff,” said 1st Lt. Andrew Carr, a Franklin Square resident. “Being here is challenging.” 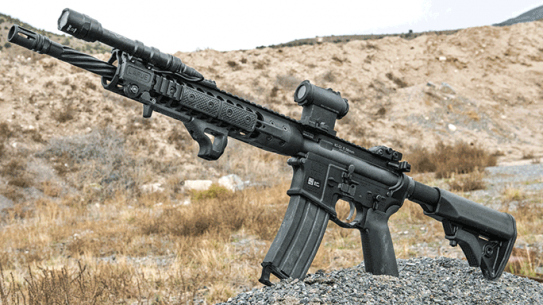