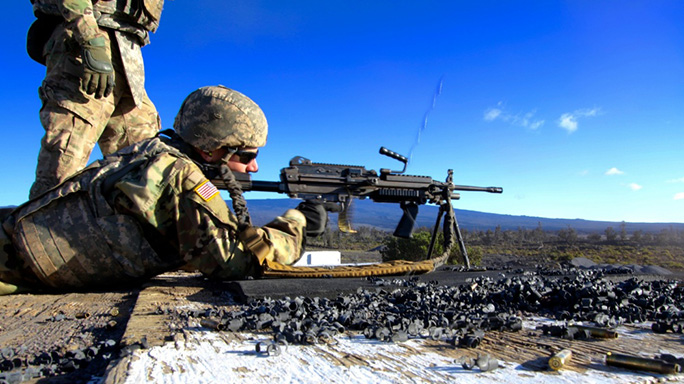 1 of 8
Photo by Sgt. Ian Ives
Army Set to Host Classified Industry Days for Next Generation Squad Automatic Rifle
A Soldier with the 25th Sustainment Brigade, fires a M249 squad automatic weapon 25 May, during Operation Ulia Pau at the Pohakuloa Training Area, Hawai’i.The range week during training Operation Ulia Pau, was designed for Soldiers to familiarize and qualify with their assigned weapons prior to a base defense and convoy live fire exercise. 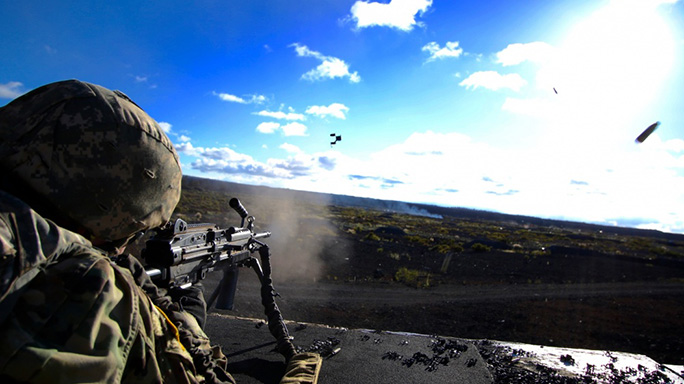 2 of 8
Photo by Sgt. Ian Ives
Next Gen SAW 2
A Soldier with the 25th Sustainment Brigade, fires a M249 squad automatic weapon 25 May, during Operation Ulia Pau at the Pohakuloa Training Area, Hawai’i.The range week during training Operation Ulia Pau, was designed for Soldiers to familiarize and qualify with their assigned weapons prior to a base defense and convoy live fire exercise. 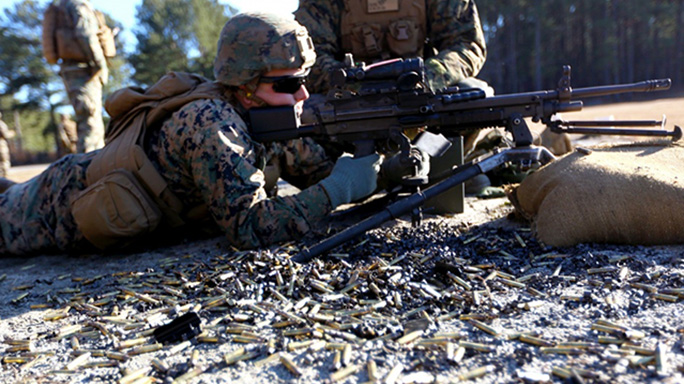 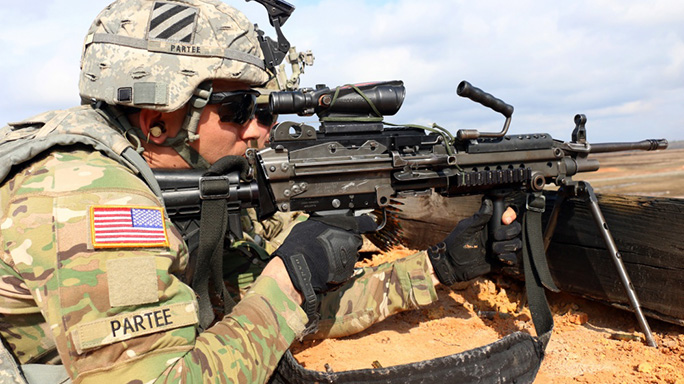 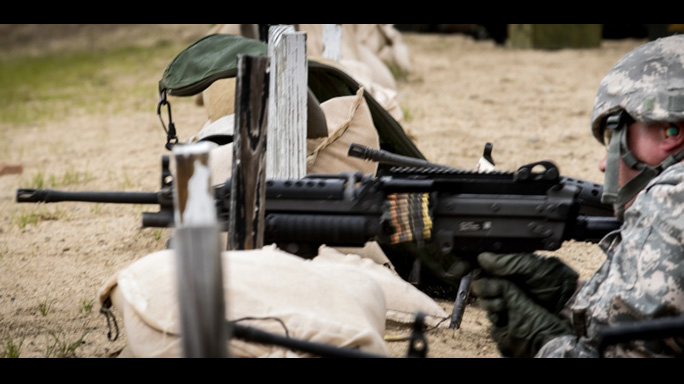 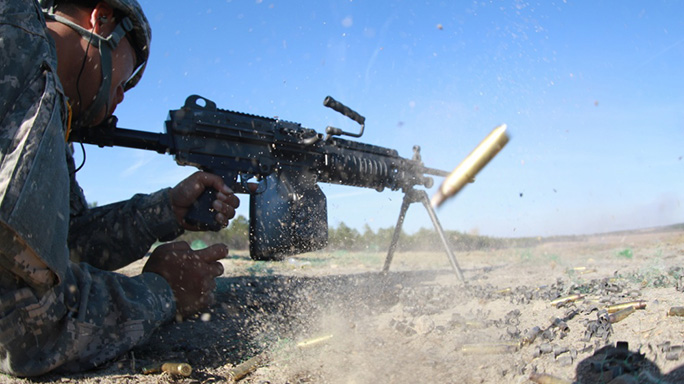 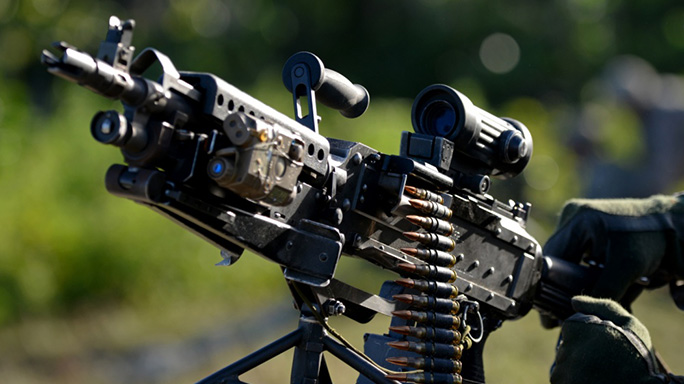 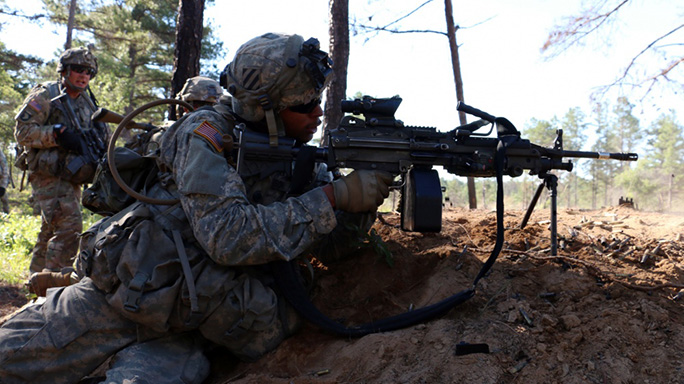 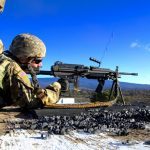 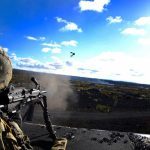 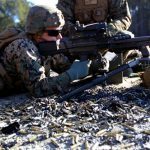 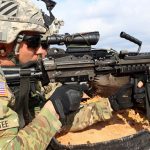 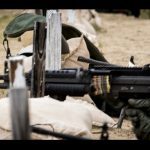 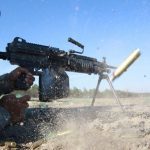 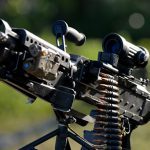 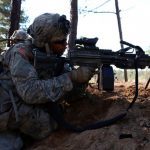 The U.S. Army has posted a special notice announcing classified industry days for its Next Generation Squad Automatic Rifle, the intended replacement for the M249 Squad Automatic Weapon (SAW) in Brigade Combat Teams (BCT) and select support units over the next ten years. According to Soldier Systems, the industry days will take place July 25-27, 2017 at Fort Benning. Contractors who want to participate have until June 23, 2017 to submit the names of all attendees.

Here are some of the general requirements for the Army’s Next Generation Squad Automatic Rifle, via FedBizOpps:

It will combine the firepower and range of a machine gun with the precision and ergonomics of a carbine, yielding capability improvements in accuracy, range, and lethality. The weapon will be lightweight and fire lightweight ammunition with improved lethality. The NGSAR will help to reduce the heavy load that burdens Soldiers and that has a significant negative impact on their mobility, survivability, and firing accuracy. Soldiers will employ the NGSAR against close and extended range targets in all terrains and conditions. The NGSAR will be compatible with and dependent on legacy optics and night vision devices to meet required capabilities. It will also be compatible with the Small Arms Fire Control system currently in development and possess back-up sights. It is anticipated the NGSAR support concept will be consistent with (comparable to) that of the predecessor M249 SAW involving the Army two level field and sustainment maintenance system. The NGSAR will achieve overmatch by killing stationary, and suppressing moving, threats out to 600 meters (T), and suppressing all threats to a range of 1200 meters (O).

The FedBizOpps notice also lists a slew of “Mandatory Key Performance Parameters (KPP)” meant to identify the system capabilities for the Next Generation Squad Automatic Rifle. These KPPs, the Army says, are critical to the “development and improvement of an effective military capability that will make a significant contribution to the characteristics of the future joint force.”

KPP 2 Operator System Training:
Soldiers will be trained to comply with the accuracy requirements in this document under simulated combat stressful conditions. Training on the system will be standards-based, leveraging technology in system design to minimize the training time and resources needed for operators/maintainers to achieve system competency. The following criteria will help to ensure system trainability:
1. TASK STEPS: 85% (T) to 95% (O) of tasks to operate and maintain the system will require less than 10 steps (including sub steps).
2. JOB/MEMORY AIDS: 85% (T) to 95% (O) of tasks that require 10 or more steps (including sub steps) will have job/memory aids that provide written procedures or diagrams to enable operators to perform the tasks without the need for extensive memorization.
3. MEMORIZATION: No more than 8 (T) and preferably 3 or less (O) discrete facts, terms names, rules, or ideas will be required to be memorized on any system task.
4. Instrumentable Multiple Integrated Laser Engagement System (I-MILES) Small Arms Transmitter (SAT) Tactical Engagement System (TES) Small Arms Transmitter (SAT). The NGSAR sight system must not interfere with the design, installation, or operation of the current I-MILES SAT and future Army-Tactical Engagement Simulation System (A-TESS) SATs when installed for Live Force-on-Force training.

KPP 3 Accuracy:
The NGSAR will have the capability to provide the P(i) metrics on the target sets located in the classified annex. This will require accurate P(h) along with ammunition capability.

KPP 4 System Weight:
The NGSAR combat configured weapon including sling, bipod and sound suppressor will weigh no more than 12 pounds (T) 8 pounds (O). This does not include ammunition or magazine.

The notice also describes “Key System Attributes (KSAs)” which are “essential to achieving a balanced solution/approach to a system, but not critical enough to be designated a KPP.”

To read the full notice on the Army’s classified industry days for its Next Generation Squad Automatic Rifle, visit fbo.gov. 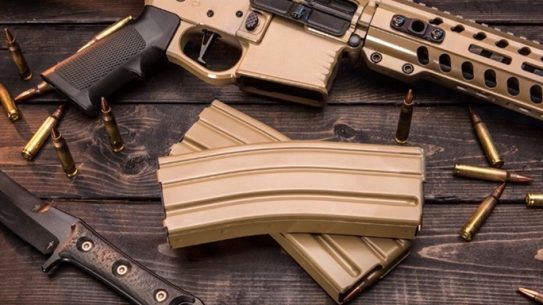