Footage shows Baker order Holbert out of the vehicle. Though she objects, she initially complies with all demands.

“Listen,” Baker says, asking Holbert to quit attempting to get back into her vehicle. “Just come back here. I just think we’re getting off on the wrong foot.”

Then Baker appears to discover marijuana and a white substance in clear bags. That’s when Holbert’s behavior begins to change.

“Her compliance changed after Officer Baker found what appeared to be marijuana and a powder substance in her bag, and attempted to detain her while waiting for backup officers,” MNPD’s Don Aaron told CNN.

Footage shows Baker attempt to put handcuffs on Holbert. However, she immediately begins to resist.

“No … Don’t put me in handcuffs,” Holbert insists. “I haven’t done anything wrong.”

At this point, Holbert grabs her bag off the back of the car and runs around to the driver’s side door. The entire time she cries for help and claims she didn’t do anything.

Baker warns her he is about to Tase her. But Holbert jumps into the driver’s seat, seemingly ready to run for it. So Baker hits her with the Taser. But Baker swats at least one of the prongs away, and instead of being immobilized, she manages to reach for a gun. Footage then shows the sudden, brief gunfight.

“What happened today is a reminder that being a police officer anywhere can be a dangerous job. My thoughts and prayers are with Officer Baker and with the families of everyone involved,” Mayor John Cooper said in a statement, reported Tennessean.

The bullet struck Baker in his torso, below his bulletproof vest, reported CNN. He remains in stable condition at a local hospital following surgery. Meanwhile, Holbert threw her gun to the ground and attempted to drive away following the shootout. However, he wounds proved fatal, and she ran the car off the road about a block away, reported CNN. Hospital officials later pronounced her dead from her injuries. 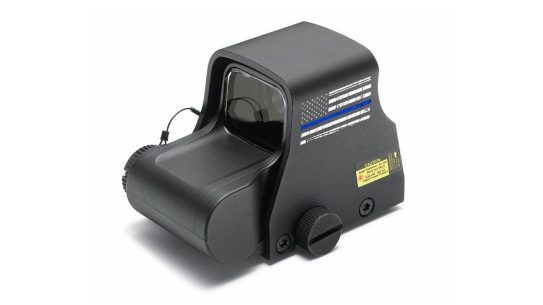 With 25-percent of the profits headed to support LE charities, the EOTech XPS2 HWS...