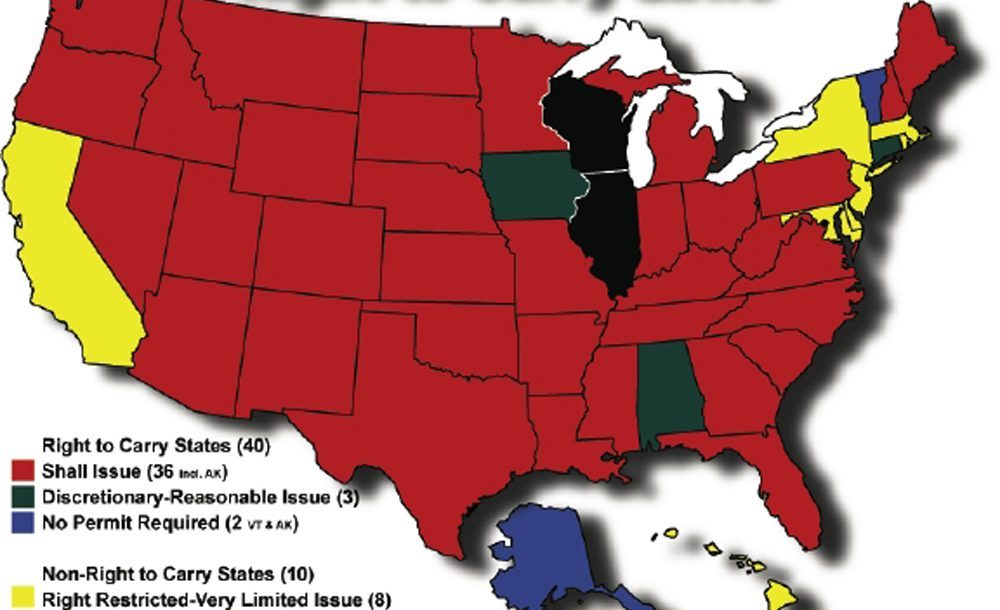 The Supreme Court, in District of Columbia v. Heller (2008), ruled that the Second Amendment protects “the individual right to possess and carry weapons in case of confrontation. This meaning is strongly confirmed by the historical background of the Second Amendment.”

There are 40 Right-to-Carry states. Thirty-six have “shall issue” laws, requiring that carry permits be issued to applicants who meet uniform standards established by the state legislature. Three have fairly-administered discretionary-issue carry permit systems. Vermont respects the right to carry without a permit. Alaska, one of the “shall issue” states, has its permit system for the purpose of permit reciprocity1 with other states, and has allowed carrying without a permit since 2003. Of the 10 non-RTC states, eight have restrictively-administered discretionary-issue systems, and two — Illinois and Wisconsin — have no permit system and prohibit carrying. 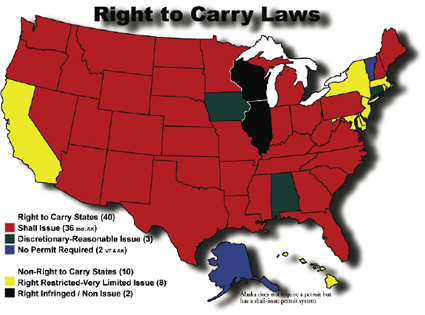 More RTC, less crime: Since 1991, 23 states have adopted RTC laws, replacing laws that prohibited carrying or that issued carry permits on a very restrictive basis; many other federal, state, and local gun control laws have been eliminated or made less restrictive; and the number of privately-owned guns has risen by about 90 million.2 There are more RTC states, gun owners, people carrying firearms for protection, and privately owned firearms than ever before. In the same time frame, the nation’s murder rate has decreased 46 percent to a 43-year low, and the total violent crime rate has decreased 41 percent to a 35-year low.3 RTC states have lower violent crime rates, on average, compared to the rest of the country (total violent crime by 24 percent; murder, 28 percent; robbery, 50 percent; and aggravated assault, 11 percent).4

RTC success: Former Colorado Asst. Atty. Gen. David Kopel: “Whenever a state legislature first considers a concealed carry bill, opponents typically warn of horrible consequences….But within a year of passage, the issue usually drops off the news media’s radar screen, while gun-control advocates in the legislature conclude that the law wasn’t so bad after all.”6 An article on Michigan’s law: “Concerns that permit holders would lose their tempers in traffic accidents have been unfounded. Worries about risks to police officers have also proved unfounded…. National surveys of police show they support concealed handgun laws by a 3-1 margin….There is also not a single academic study that claims Right to Carry laws have increased state crime rates. The debate among academics has been over how large the benefits have been.”7

RTC permit-holders are law-abiding: Florida has issued more carry permits than any state (1.5 million), but revoked only 166 (0.01 percent) due to gun crimes by permit-holders.8

Background: Before 1987 there were 10 RTC states: (Ind. Me., N.H., N.D., S.D. and Wash. had “shall issue” laws. Ala. and Conn. had fairly-administered discretionary-issue systems. Georgia’s “shall issue” law was interpreted as such in some jurisdictions. Vermont allowed carrying without a permit. In 1987, Florida enacted a “shall issue” law, and gun control supporters predicted “Wild West” shootouts would ensue. However, through 1992 Florida’s murder rate decreased 23 percent, while the U.S. rate rose nine percent; thereafter, murder decreased nationally and in Florida.9 Then-Florida Licensing Division Director John Russi noted, “Florida’s concealed weapon law has been very successful. All major law enforcement groups supported the original legislation….[S]ome of the opponents of concealed weapon legislation in 1987 now admit the program has not created the problems many predicted.”10 In a 1995 letter to state officials, Dept. of Law Enforcement Commissioner James T. Moore wrote, “From a law enforcement perspective, the licensing process has not resulted in problems.”

Citizens can defend themselves. Analyzing National Crime Victimization Survey data, criminologist Gary Kleck concluded “robbery and assault victims who used a gun to resist were less likely to be attacked or to suffer an injury than those who used any other methods of self-protection or those who did not resist at all.”11 In the 1990s, Kleck and Marc Gertz found guns were used for self-protection about 2.5 million times annually.12 The late Marvin E. Wolfgang, self-described as “as strong a gun-control advocate as can be found among the criminologists in this country,” said, “The methodological soundness of the current Kleck and Gertz study is clear. I cannot further debate it. . . . I cannot fault their methodology.”13 A study for the Justice Dept. found 34 percent of felons had been “scared off, shot at, wounded or captured by an armed victim,” and 40 percent had not committed crimes, fearing victims were armed.14

The right to self-defense has been recognized for centuries. Cicero said 2,000 years ago, “If our lives are endangered by plots or violence or armed robbers or enemies, any and every method of protecting ourselves is morally right;” English jurist Sir William Blackstone observed that the English Bill of Rights recognized “the right of having and using arms for self-preservation and defense” as intended “to protect and maintain inviolate the three great and primary rights,” the first of which is “personal security.”15 Sir Michael Foster, judge of the Court of King’s Bench, wrote in the 18th century, “The right of self-defense . . . is founded in the law of nature, and is not, nor can be, superseded by any law of society.”16

The Supreme Court, in U.S. v. Cruikshank (1876), recognized that the right to arms is an individual right, stating that it “is not a right granted by the Constitution. Neither is it in any manner dependent upon that instrument for its existence.” In Beard v. U.S. (1895), the court approved the common-law rule that a person “may repel force by force” in self-defense, and concluded that, when attacked, a person “was entitled to stand his ground and meet any attack made upon him with a deadly weapon, in such a way and with such force” as needed to prevent “great bodily injury or death.” In the Gun Control Act (1968) and Firearms Owners’ Protection Act (1986), Congress stated that it did not intend to “place any undue or unnecessary Federal restrictions or burdens on law-abiding citizens with respect to the acquisition, possession, or use of firearms appropriate to . . . personal protection, or any other lawful activity.”

Police aren’t required to protect you. In Warren v. District of Columbia (1981), the D.C. Court of Appeals ruled, “official police personnel and the government employing them are not generally liable to victims of criminal acts for failure to provide adequate police protection . . . a government and its agents are under no general duty to provide public services, such as police protection, to any particular citizen.” In Bowers v. DeVito (1982), the Seventh Circuit Court of Appeals ruled, “[T]here is no constitutional right to be protected by the state against being murdered by criminals or madmen.”

Nonsense from Brady Campaign (formerly Handgun Control, Inc.): Sarah Brady: “the only reason for guns in civilian hands is for sporting purposes;” former HCI Chair, the late Pete Shields: “put up no defense – give them what they want;” Brady Center’s Dennis Henigan: self-defense is “not a federally guaranteed constitutional right.”17 In 1999, HCI claimed that between 1992-1997 violent crime declined less in RTC states than in other states.18 (HCI previously claimed RTC caused crime to rise.) HCI erred in categorizing 31 states as having RTC during the period, since only 17 of the 31 had RTC in 1992. HCI calculated crime trends from 1992 to under-represent the impact of RTC laws; by 1992 many states had RTC for many years and had already experienced decreases in crime. HCI misclassified Alabama and Connecticut as “restrictive,” and credited restrictive laws for crime decreasing in some states, though states that had restrictive carry laws had had them for many years, and crime did not begin declining in those states until the 1990s, for reasons unrelated to guns.

Nonsense from Violence Policy Center: In 1995, VPC claimed Florida’s RTC law “puts guns into the hands of criminals.”19 The claim was false, since the law permits a person to carry, not acquire, a firearm. VPC claimed “criminals do apply for concealed carry licenses,” without noting that such applications are rejected. Contradicting itself, VPC noted that criminals requested that their rejected applications be reconsidered. “To set the record straight,” Florida Secy. of State, Sandra B. Mortham, said, “As of November 30, 1995, the Department had denied 723 applications due to criminal history. The fact that these 723 individuals did not receive a license clearly indicates that the process is working.” She added, “the majority of concealed weapon or firearm licensees are honest, law-abiding citizens exercising their right to be armed for the purpose of lawful self-defense.”20 In 2001, VPC claimed that there are more women murdered with handguns, than criminals killed in self-defense.21 However, the value of handguns for self-defense is not in how many criminals are killed, but in how often people use handguns to prevent crimes, and how often criminals don’t attack, fearing potential victims are armed. VPC also undercounted the number of criminals killed in self-defense by counting only those noted in police reports, thus excluding defensive homicides later determined to have been justified.

McDowell math: In 1995, anti-gun researcher David McDowell claimed that gun homicide rates increased in Miami, Jacksonville, and Tampa after Florida’s 1987 RTC law.22 But homicide rates fell 10, 18, and 20 percent, respectively, in those metro areas from 1987 until 1993, the most recent data at the time.23 To show an increase, McDowell calculated Jacksonville and Tampa trends from the early 1970s, when rates were lower than in 1993, but calculated Miami’s from 1983, since earlier rates were higher and suggested crime had decreased. None of McDowell’s homicides was committed by a carry permit holder, and he did not indicate which homicides had occurred in situations where a permit would have been required to carry a gun. McDowell once claimed D.C.’s murder rate decreased after its 1977 handgun ban; in fact the rate tripled.24

The 43:1 claim: Based upon a small study of King’s County (Seattle), Washington, gun control supporters claim a gun at home is “43 times more likely” to be used to kill a family member than a criminal.25 To reach that ratio, defensive gun uses are undercounted by counting only cases in which criminals were killed. Most often, when guns are used to defend against criminals, the criminals are only scared off, captured or wounded. Kleck has called the 43:1 ratio and its variants “the most nonsensical statistic in the gun control debate.”26

The Supreme Court, in District of Columbia v. Heller (2008), ruled that the Second…