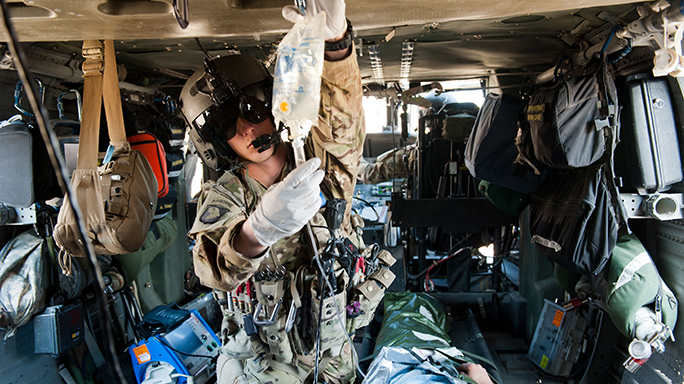 Photo by Sgt. Duncan Brennan, U.S. Army
Medical supplies, such as IV solution bags, will be kept cool on the way to treat heat injuries by the Heat Ailment Recovery Pack, or HARP, developed by the Natick Soldier Research, Development and Engineering Center.
Comment(s)

The following is a release from Bob Reinert/USAG Natick Public Affairs:

In hopes of bringing medical treatment to Soldiers on remote battlefields in warm climates, the folks at Natick Soldier Research, Development and Engineering Center, or NSRDEC, recently put forth a “cool effort.”

The Heat Ailment Recovery Pack, or HARP, is being developed by the Joint Foodservice Engineering Team, or JFET, of the Combat Feeding Directorate at NSRDEC. It will help personnel maintain medical supplies at the proper temperatures and keep potable water cool until medical attention can be administered to Soldiers with heat-related injuries.

“They don’t have this capability at all,” said Ben Williams, a mechanical engineer with JFET. “It’s never been done before. It’s a brand-new concept.”

Williams was approached about a year ago by deployed Joint Special Operations Command U.S. Africa Command, or JSOC AFRICOM, personnel about developing something to cool water and medical supplies to treat individuals, who are suffering from heat-induced medical conditions. Together, they approached the Rapid Equipping Force, which approved the funds to produce four of the bags for testing and evaluation.

“I love working directly with people in the field because it makes your job easier,” Williams said. “You’re not trying to develop products in a vacuum, and you’re not making products that people don’t want. It makes your life easy.”

Williams had already helped Soldiers in the field cool water with the Beverage Cooling Unit and maintain water temperature with the Insulated Container for Bottled water. JSOC AFRICOM wanted Williams to combine the two concepts, providing a means to not only maintain the temperature of medical supplies and bottled water, but to cool them on demand, when necessary.

“Being able to provide Soldiers on the ground with medical supplies and water at the proper temperature after an extended, or even an indefinite, period of time in remote locations is a major challenge,” Williams said. “The state-of-the-art technology before the HARP for this application was just your standard portable, plug-in refrigerator. The HARP is a completely new concept, which can either maintain the contents’ temperature or drop it to acceptable levels within minutes, depending on what the user requires.”

Williams and Brian Grady, an equipment specialist with the NSRDEC Aerial Delivery Design and Fabrication Team, got to work making the concept a reality.

“We have to actually make this from scratch,” Grady said. “We’re not production; we’re prototype. But to build four of these? It’s a production process, and we tackle it and get it done.

“Obviously, it’s not a parachute, but its fabric. We have a lot of these items that we take in, too. Who else will build this?”

The result was a 23-inch-wide, by 26-inch-long, by 20-inch-high pack, which weighs up to 60 pounds when fully loaded with medical supplies and water. Its micro-refrigeration unit is powered by a BB-2590 lithium-ion battery, which can be run continuously for three hours in 120-degree temperatures.

“You can drag an IV bag or medical supplies down to 50 degrees off of one battery from 120 degrees, if you just let it run,” Williams said.

An integrated flexible solar panel can also be used to recharge batteries and extend the HARP’s runtime while acting as a solar shade for the system.

“It needs to be a self-sufficient system, capable of running indefinitely,” said Williams in explaining the solar panel.

The HARP, coated with a newly developed infrared-reflecting material, can cool its contents down from 120 degrees to a usable temperature of 98 degrees in a mere 15 minutes. Using its remote control and monitoring system, the HARP can keep an IV fluid bag constantly usable (below 98.6 degrees) for 100 hours in 120-degree temperatures, all while being monitored and controlled from a distance of up to 100 feet.

“Remote monitoring and control is an absolute necessity, especially when the system is stored on the outside of the vehicle or in a cargo area,” Williams said.

The HARP is also capable of being broken down and configured for man-transportable use within minutes, while still maintaining its cooling capability. Modular Lightweight Load-carrying Equipment, or MOLLE, features with integrated shoulder straps added to its backside allow the bag to be worn like a backpack or attached to and carried on another pack.

“It’s actually a two-bag system,” Grady said. “The challenge was [working with] the fabric … and how unforgiving the fabric was. There’s no room for error with the fabric.”

Most of the work on the HARP was done at NSRDEC, but four other Army agencies and two outside companies ultimately were involved in the process.

Eight months after the need for the HARP was determined, four were sent to the REF, May 20. Another four systems are scheduled to be fielded to the U.S. Army Medical Materiel Agency for user evaluation aboard MEDEVAC aircraft.

“I think we did a great team effort on this one, because we got everyone involved and leveraged all of the necessary skills to get the job done,” Williams said. “We have the capability here at Natick to take a Soldier’s need and turn it into a reality. It’s a cool effort.” 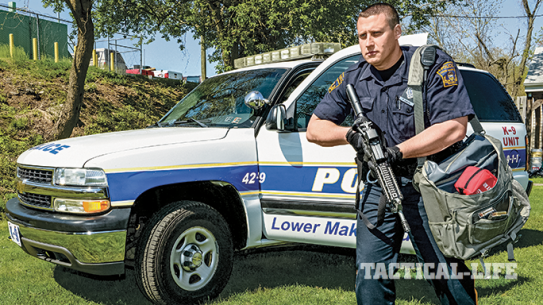 Be prepared at a moment’s notice with these active-shooter-ready gear bags!