Speaking on the ground from the Fly-In, Smith & Wesson Holding Corp. President and CEO Michael Golden said, “We’re here in Washington, D.C., for the NSSF Legislative Fly-In where there’s several industry leaders, CEOs and presidents of companies that have banded together to go up on Capitol Hill and talk to key legislators both in the House and Senate about issues that are really important to our industry. We create jobs in the United States and it’s important that they understand our point of view.”

Commenting on the success of the Second Annual NSSF Legislative Fly-In, NSSF President Steve Sanetti said, “This was a tremendous opportunity for industry leaders to express their concerns and extend their thanks to lawmakers. Demonstrating a deft command of the issues, participants clearly identified those actions that needed to happen in order to keep America’s firearms and ammunition industry financially sound in an ever-changing global marketplace.”

“It’s really critical that we come to Washington from time to time to tell our story,” said Sturm, Ruger CEO Michael Fifer. “If we’re not here telling our story, somebody else is going to tell it for us.”

“If we aren’t here supporting our system, supporting our industry and our friends, we’re not going to have much of a future,” said Hornady Manufacturing Co. Vice President and Director of Sales Jason Hornady.

“These face-to-face meetings play an integral role in policy decisions that impact the everyday business of the entire firearms and ammunition industry,” said NSSF Senior Vice President and General Counsel Lawrence G. Keane. “Engaging legislators directly is a must and our team could not have done a better job representing their companies, employees and this industry.” 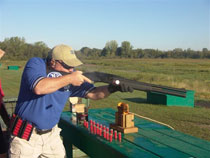