Tasha Hanish, with a semiautomatic on her belt and a rifle in her hands, looks as if she leapt out of a video game onto the NRA gun show floor.

If FNH USA thought the athletic brunette would be good fishbait to lure male gunbuyers away from the Remington and Smith & Wesson booths, they were right: men were rapt as she showed off the features of FNH guns.

She knows what she’s talking about. “I’m 30, and I’ve been shooting for 17 years,” Hanish told the Daily News. “My dad took us out hunting in Oregon. He taught me.”

Now, she’s ladies national champion in “three gun,” the shooting sport where competitors hit targets as far away as 600 yards with a pistol, a shotgun and a rifle while running an obstacle course.

More women are buying their own guns than before, according to a 2009 survey by the National Shooting Sports Foundation, which found that gun shop owners reported a 70% increase in female buyers last year.

Some women, like Hanish, are into the skill of target practice, while others bought their weapons for hunting. But the study found that most women are buying handguns for self-protection.

Laura Opalka is one example, “I learned how to shoot when I was 5 years old, but I didn’t really decide to buy a gun until two years ago,” said the stylish CPA inside the Charlotte convention center. “I grew up here, and I’ve seen it change. We have a large problem with illegal immigrants, and there has been an uptick in break-ins and violent crimes while at the same time the local government doesn’t seem to be putting enough police on the street.

“I’m arming up,” she said. “And when my 21-year-old daughter comes home from college, I want her to learn as well.”

Kelly Underwood, a voluptuous blond who got into target shooting with her boyfriend, a lifelong hunter who works in law enforcement, said, “I actually hit the target. I was pretty proud of myself.” But her reason to learn shooting is also one of self-defense: “I have a stalker,” she explained.

American gun manufacturers, like Utah’s Cobra company, have tried to “target” the female market with colorful small guns that shoot as few as two bullets. “We have pink, purple, fuschia,” said Kimberley Wallace at the Cobra booth. “They’re Derringers, just like the ones from the 1800s that ladies tucked in their garter belts.”

But their most popular model with female customers is The Shadow, a pink .38 Special that weighs only 15 ounces. “It weighs about as much as a cell phone, and it fits in your purse,” Wallace explained. “It has five shots, and if you’re scared, you just pull this out and shoot, shoot, shoot.”

“Ladies Only” shooting camps have begun sprouting up, including the Babes With Bullets camp, which trains everyone from the more advanced to “ladies who have never held a gun before.” 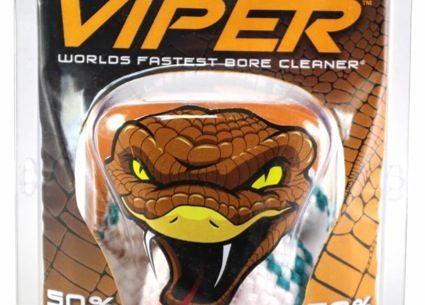 Tasha Hanish, with a semiautomatic on her belt and a rifle in her hands,…