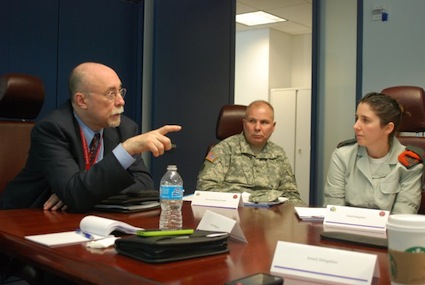 Eight leaders from the Israeli Defense Force learned how the New York National Guard did business during Hurricane Sandy from Guard leaders who oversaw the month-long response operation.

The meeting with the Guard leaders and officials from the New York State Division of Homeland Security and Emergency Services, New York City’s Office of Emergency Management and the Fire Department of New York City was the culmination of a three-day visit by the IDF officers.

The Israeli delegation, including members of Israel’s National Police Force and the IDF’s Home Front Command — the Israeli equivalent to the National Guard — were in New York to learn about interagency disaster response and the integration of military and civilian responders.

Read the rest of Col. Richard Goldenberg report at army.mil