NYPD body cam footage of an officer-involved shooting has been released for the first time since the department equipped some of its officers with the devices as part of a pilot program earlier this year.

The incident, which you can watch above, took place on Sept. 6, 2017. The officers were conducting a wellness check at an apartment in the Bronx after the tenant’s landlord said he was behaving erratically, according to the New York Post. The video begins with the landlord opening a door for the officers. Standing in the corner of the room in sunglasses is 31-year-old Miguel Richards.

The NYPD says Richards was armed with a knife and was hiding an object—later determined to be a fake gun—behind his back. The officers can be heard ordering Richards to drop the weapons multiple times from outside the room. The commands take place over the course of several minutes, but he just stands there completely silently, refusing to comply.

Eventually, Officer Jesus Ramos moves into the room with a taser. Though it’s not visible in the body cam footage, NYPD officials say Richards raised his imitation firearm at the officer, at which point Officers Mark Fleming and Redmond Murphy, from the city’s 47th Precinct, opened fire. Fleming discharged nine times, while Murphy fired seven times.

Richards was pronounced dead at a nearby hospital.

According to the Post, there are 670 cops wearing NYPD body cam devices in 10 different precincts. A total of 1,300 NYPD officers are expected to be wearing them by the end of the year. 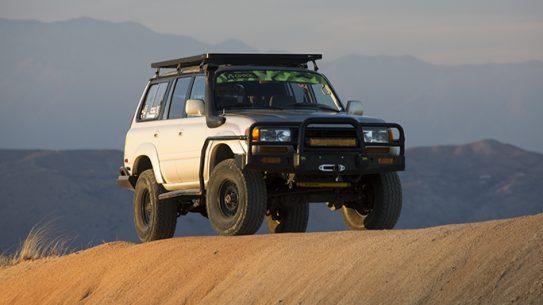 The ADV80: The Pinnacle Bruiser of Custom Land Cruisers

As far as Land Cruisers go, Rodney Wills' custom 'ADV80' will make it to...