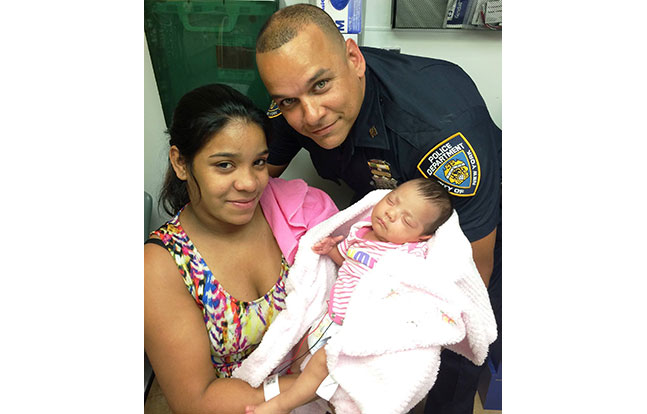 As an Army Ranger for 10 years, serving two tours in Iraq and one in Afghanistan, New York Police Department officer Johnny Castillo has seen intense action that can change at a moment’s notice.

When 2-month-old Adelyn Pena-Fernandez stopping breathing in her Fordham Manor apartment on the morning of Aug. 26, her parents called 911 and pleaded for help.

Castillo, 38, was right outside when his radio crackled with details of the job about 11:40 a.m. Castillo, who has four years with the department, was at East 196th Street and Grand Concourse training his radar gun on speeding motorists as part of the mayor’s Vision Zero initiative.

“I ran upstairs and saw the mother and the father standing there over the baby, who was lying on the dining room table,” Castillo said in a statement. “The baby was blue, not breathing, unconscious. They were scared. They were really nervous.”

Castillo “made a beeline for the baby, quickly assessed the situation and calmly applied four light chest compressions,” according to a release from the NYPD.

The compressions worked as the girl quickly began breathing on her own again.

Castillo’s armored vehicle was once hit by a roadside bomb in Baghdad. He received two Purple Heart medals and a Presidential Citation personally-awarded by President George W. Bush.

“Nothing that I’ve ever done in my life, in my military career or on this job can compare to what happened to me today,” Castillo said of saving Pena-Fernandez.

EMS workers arrived at the family’s sixth floor apartment shortly thereafter, and transported the baby to Montefiore Medical Center, where she remains stable in the pediatric unit, according to the NYPD.