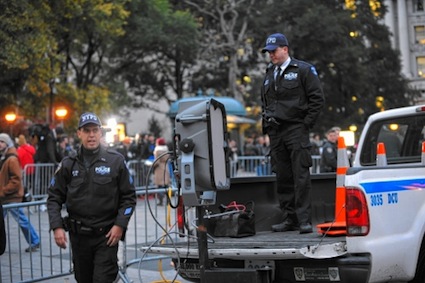 The NYPD’s anti-protest arsenal includes an amplifier developed for the military — but it’s being used as a loudspeaker, not a “sound cannon” to break up crowds.

It’s called a Long Range Acoustical Device and it has the ability to blast a small area with 110 decibels of sound — the equivalent of a power saw at close range.

But police officials say that’s not how it’s being used at Zuccotti Park and other protest sites, where it functions as the world’s clearest megaphone.

“We set it up away from where a crowd is. We create a 50-foot safety zone. It sends out a clear, uniform message that can be heard for several blocks.”

The California company that invented the device says it was developed after the bombing of the USS Cole in Yemen in 2000 so naval ships could communicate with anyone approaching.