Ohio police have released dash cam footage of an officer-involved shooting involving an armed man who allegedly reached for his gun despite repeated warnings not to during a traffic stop. Watch the harrowing clip above.

According to Fox affiliate WRGT, Officer Jonathon McCoy of the Kettering Police Department pulled over a vehicle for failing to signal while changing lanes on Sunday, Aug. 27. The video starts off showing McCoy approaching the car from the passenger side. He then spends about a minute identifying the occupants of the van and asking what they were doing in the area.

At about 1:05 into the video, McCoy suddenly draws his gun and orders one of the van’s occupants—33-year-old Jason Hoops—to put his hands up. During a news conference shortly afterward, Kettering Police Chief Chip Protsman said an investigation revealed that Hoops had a firearm in his right front pants pocket, with the grip sticking out, thus prompting McCoy’s response.

The video shows McCoy ordering Hoops to put his hands up multiple times. He also tells him to put his hands on the dash repeatedly and orders him not to move numerous times. At one point, McCoy can be seen reaching into the vehicle. Protsman said McCoy did this in order to prevent Hoops from reaching for his gun.

“Do not do anything stupid,” McCoy can be heard saying.

Meanwhile, the other occupants of the van can be heard pleading with Hoops to comply and that “it’s just not worth it.”

At the 2:13 mark into the dash cam footage, McCoy opens fire five times. He then moves away from the van, calls for backup, starts to order Hoops to put his hands up again, and then fires four more times. Chief Protsman said McCoy opened fire again after seeing Hoops’ hand reaching down towards his gun.

Hoops was killed instantly. McCoy has been placed on administrative leave pending an investigation.

“From what I’ve seen in this video, I’m pretty confident saying this officer did a very good job,” stated Protsman.

Hoops, who had two felony convictions in 2009 for assault and possession of controlled substances, told an associate that he would rather die than go back to jail and that he would “take out any cop he had to,” Protsman said, citing a statement signed by that associate.

Meanwhile, Hoops’ family has hired an attorney to look into the circumstances surrounding the officer-involved shooting. 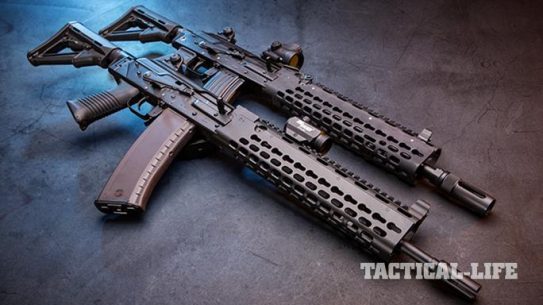 Krebs Custom is turning heads with its smooth, accurate, light-recoiling KV-13 AKs that are...