Ohio police released intense body cam and dash cam footage of a shootout with an armed suspect late last week, providing an insightful look at the dangers LEOs could potentially face every time they respond to a call. Watch it above.

Fox 19 reports that on May 28, Green Township Police and Hamilton County Sheriff Deputies were notified that a man later identified as 51-year-old Brendan MacDonald had fired a gun at his neighbor outside his home on Jessup Road in Cincinnati.

In the 911 call, the neighbor reportedly said MacDonald talked about “killing demons.”

When police arrived at the scene, MacDonald was sitting in a lawn chair on his front porch. When he saw the officers, he pointed his gun at them and opened fire. The body cam and dash cam footage shows the officers returning fire, taking cover, and eventually trying to negotiate with MacDonald when he retreated back into his house and refused to come out.

Eventually, the Hamilton County Special Response Team was called to the scene. After a five-hour standoff, they were able to take MacDonald into custody without any injuries.

“This was a very dangerous call for the responding officers,” Green Township Police Chief Jim Vetter said in a statement posted to Facebook. “The Green Township Officers and Hamilton County Sheriff Deputies that responded to this call should be commended for the courage and professionalism. They relied on their training and kept their composure in an extremely stressful situation. I would also like to thank the members of the Hamilton County Special Response Team for their role in seeing this incident to its successful conclusion. This was a great example of two departments working together in a cooperative manner to achieve a desired result. That result in this case was taking the individual into custody without any loss of life or bodily injury.”

MacDonald has been indicted by a Hamilton County grand jury on seven counts of felonious assault and six counts of attempted murder. 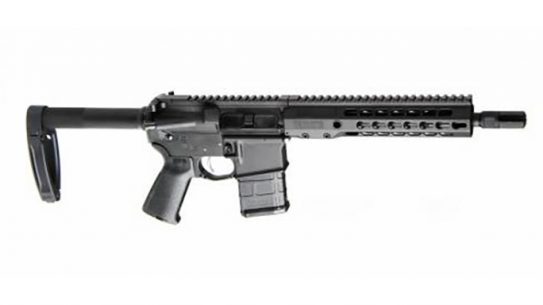 Best known for its rifles, Barrett is now offering the REC7 DI pistol, which...