Oregon police officers shot and killed a man April 10, ending a wild gun battle in which the suspect fired 36 rounds at officers. Police recovered the suspect’s son, still in the suspect’s vehicle, who was remarkably unharmed. Both Oregon State Troopers and Klamath County Deputy Sheriffs responded.

The incident began when police responded to a call that the suspect, Brennon Goff, was intoxicated and attempting to take his children, reported kcby.com. A state trooper first spotted Goff and gave chase. Then both state police and sheriff’s deputies stopped Goff’s car using spike strips. And that’s when Goff opened fire.

“Goff immediately began firing at the pursuing officers,” the Klamath County Grand Jury reported, according to kcby.com. “Goff was armed with an AR-15 style weapon and was in possession of a total of 10 fully loaded magazines and more than 250 rounds of ammunition.”

Then Goff proceeded to fight like hell, reportedly unleashing 36 rounds into three different police vehicles. Goff managed to hit one state trooper during the onslaught, reported kcby.com. Officer body camera footage shows the hail of bullets rip through the windshield of a squad car. The officer, clearly pinned down, struggles to get the vehicle into park. He then finally evades to cover behind the vehicle. But Deputy Maria Gray and Trooper Justin Henrick returned fire, striking Goff, reported kcby.com. Officers then attempted life saving measures, but Goff died on the scene.

“I don’t think I’m alone when I admit my heart skipped a beat when I first viewed this video,” said Oregon State Superintendent Travis Hampton, reported kcby.com. “I credit the professionalism and remarkable bravery of the Oregon State Police Troopers and Klamath County Deputy Sheriffs that brought this violent event to end.” 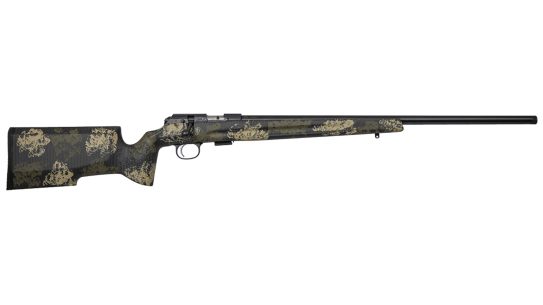 With a Manners stock, adjustable trigger and suppressor-ready variants, the CZ 457 Varmint Precision...