Origami hasn’t exactly taken off as a design trend when it comes to tactical gear, and, if we’re being honest, it probably never will, but that doesn’t make this latest news coming out of Brigham Young University in Utah any less fascinating: a team of mechanical engineers at BYU have developed a lightweight, bulletproof shield with an origami-inspired design that protects law enforcement officers from gunfire.

The new shield is made of 12 layers of bulletproof Kevlar, weighs just 55 pounds and uses a Yoshimura origami crease pattern to expand — in five seconds — around an officer, meaning it provides protection on the sides in addition to the front.

“It goes from a very compact state that you can carry around in the trunk of a car to something you can take with you, open up and take cover behind to be safe from bullets,” said Terri Bateman, BYU adjunct professor of engineering and research team member. “Then you can easily fold it up and move it if you need to advance your position.”

“We worked with a federal special agent to understand what their needs were, as well as SWAT teams, police officers and law enforcement, and found that the current solutions are often too heavy and not as portable as they would like,” said Larry Howell, professor of mechanical engineering at BYU. “We wanted to create something that was compact, portable, lightweight and worked really well to protect them.”

During testing, the shield stopped handguns that fired 9mm, .357 Magnum and .44 Magnum rounds.

“Those are significant handguns with power,” Howell said. “We suspected that something as large as a .44 Magnum would actually tip it over, but that didn’t happen. The barrier is very stable, even with large bullets hitting it.”

The shield is currently only a prototype. It’s not being used by any law enforcement agencies. But law enforcement officers have tested it on site and responded favorably. The team at BYU also hope to make other variants, including models to be used by individual officers and in public buildings to protect against emergency situations such as a school shooting. 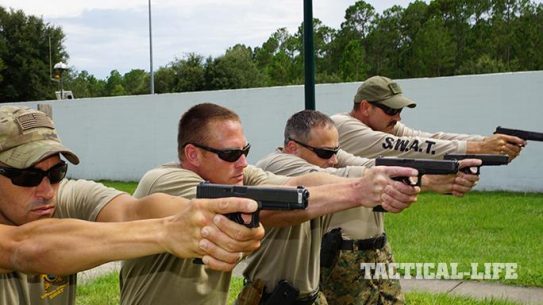