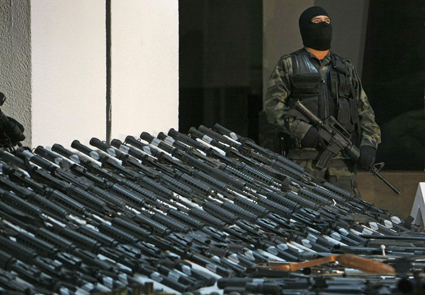 In the past few months, Mexico and its violent drug cartels have become, in the words of US Attorney General Eric Holder, “a national security threat.”  In 2008, the Mexican government reported drug-related violence in the border communities such as Juarez and the northern states claimed more than 6,000 lives, including about 550 government and law enforcement officials, many of whom were victims of assassination. In Juarez, ten thousand soldiers and federal police are trying to control lawlessness that has resulted in an average of ten shooting deaths every day. So far, in 2009, at least 1,000 more people have died.

Drug killings south of the border doubled last year, the result of a government crackdown on the cartels and competition among gangs for control of the lucrative border areas.

Now, the violence is spilling into the US. The New York Times reports 200 drug-related home invasions in Tucson, Arizona, and there have been 700 kidnappings in the Phoenix area. Many of the victims of these crimes are involved in drug trafficking, but innocent bystanders are also at risk when ruthless killers are willing to shoot indiscriminately in US neighborhoods.  Such incidents occur almost daily on a smaller scale in American cities, but the growing volume of these incidents in the Southwest has gained the attention of local, state and federal agencies.

Mexican officials believe Americans are the prime customers of Mexican drug cartels, and several US law enforcement officials are arguing that Americans are also the prime suppliers of firearms used by the cartels to shoot each other and the hundreds of innocent Mexican citizens who get caught in the crossfire.  For example, William Newell, Special Agent in Charge of BATFE, Phoenix Field Division, argues that in Mexico, “Drugs go north, guns go south.” However, Mexico has traced only a small percentage of criminals’ guns, and it is undeniable that Mexican drug dealers can easily afford to import guns from anywhere in the world.  Cartels also are using many types of weapons, including hand and rocket propelled grenades, submachine guns and belt-fed machine guns that are unavailable for commercial sales in the US. Although some of these firearms are US-manufactured, many were sold legitimately to Mexican government agencies and armed forces and then transferred illegally to criminals. They could have also been smuggled into the country through the massive international arms market.

Mexican law prohibits private ownership of large-caliber pistols and military rifles, creating an even larger demand for these firearms in a black market, which is often fed by the international small arms market.  A 2007 World Bank report estimated that about half a billion firearms are available around the globe, and about 100 million of these are Kalashnikovs, most of them full auto AK-47s, not commercially available in the US but on sale for as little as $30 in many third-world countries that are happy to unload them in large quantities.

The corruption in the Mexican military and law enforcement agencies is so deep and pervasive that meaningful control of weapons in the country may be impossible, regardless of whether the weapons are legitimately acquired or not.  Mexico needs top-to-bottom political and economic reform, which is obviously impossible in the short-term.

The Obama administration has made clear its desire to renew the ban on assault weapons and federal officials have cited Mexican drug violence as a strong reason to reenact the ban.  It is completely unclear, however, if banning semi-automatic military rifle sales in the US would have any effect on Mexican violence, given the multiplicity of sources worldwide are ready, willing and able to sell guns and weapons to drug gangs.

What is certain is the American appetite for drugs fuels the problem.  If Americans stopped using drugs, the vast sums of money flowing to Mexican cartels would dry up.  In fact, as noted earlier, the recent increases in violence suggest that Mexico is doing a better job in its anti-drug efforts, creating desperation amongst the cartels who are now struggling to protect diminished revenues.

It is also very unclear whether ending assault weapon sales in the US would curb violence at home.  Firearm sales have skyrocketed recently because Americans believe the ban will return.  Excise taxes on firearm sales increased 31 percent in the fourth quarter of 2008, and gun prices, particularly for rifles subject to the assault weapon ban, have risen radically with a mushrooming demand. Prices for ammunition, often the calibers used in military rifles, have also jumped partly because of increased production costs, but also due to the increase of demand.

In any case, another assault weapon ban is highly problematic for some time given the plethora of higher-priority political and economic issues facing the country.  What can be done, however, is to focus on existing US gun and drug laws, with quick and severe punishment for offenders, and more treatment for drug users.

In the past few months, Mexico and its violent drug cartels have become, in…