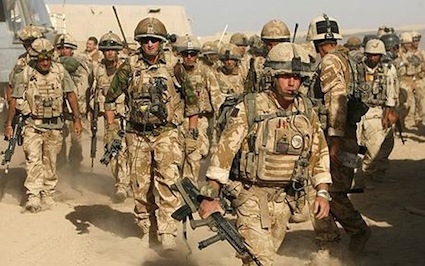 Defense Secretary Leon Panetta and his NATO counterparts are considering leaving 8,000 to 12,000 troops in Afghanistan after 2014, but a dispute arose Friday between the U.S. and German defense officials over whether that contingent would be an international force or an American one.

The conflicting accounts came as NATO defense ministers gathered here to discuss the endgame of the 11-year-old war in Afghanistan. President Barack Obama has said that the last combat troops will leave Afghanistan on Dec. 31, 2014, leaving the bulk of the country’s security in the hands of the Afghans.

German Defense Minister Thomas de Maiziere told reporters Panetta had informed him at the Brussels meeting that the United States would leave between 8,000 and 10,000 troops in the war-torn country at the end of 2014.

Defense Secretary Leon Panetta and his NATO counterparts are considering leaving 8,000 to 12,000…