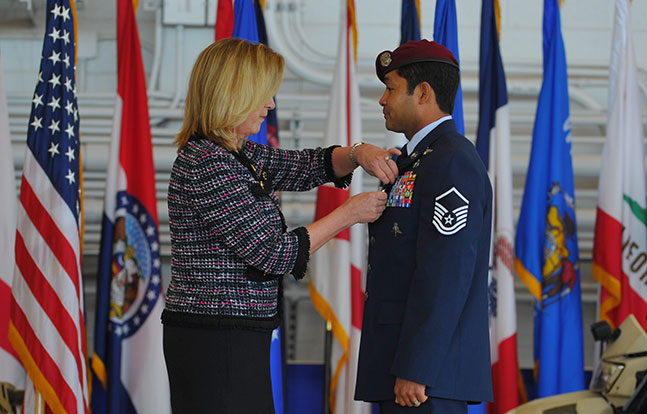 Master Sgt. Ivan Ruiz, a pararescueman deployed with the 22nd Expeditionary Special Tactics Squadron, was awarded the U.S. military’s second highest decoration for an Airman. He earned the medal for protecting and saving the lives of two wounded teammates while under heavy enemy fire at close range during combat operations in Kandahar Province, Afghanistan, Dec. 10, 2013.

“We reserve the Air Force Cross for those special few who exhibit unequaled courage and bravery despite overwhelming odds, and that’s exactly what (Ruiz) did,” James said. “Today we are adding his name to an extremely small list of five additional Airmen, since Sept. 11, 2001, who demonstrated this highest caliber of service and excellence.”

While moving through several compounds after infiltrating enemy territory with his special operations forces counterparts, Ruiz and two U.S. Army Special Forces teammates became separated from the main friendly element. They were immediately confronted by four insurgents in a point-blank engagement. Ruiz and his teammates quickly killed the enemy, but suddenly became trapped in a courtyard by vicious and intense insurgent crossfire.

“I didn’t really think, I reacted,” Ruiz said. “Anytime something bad happens in my career, I just fall back on my training. It prepares us for what we can encounter when we are doing our work.”

The two Soldiers were immediately wounded by the enemy’s barrage of heavy gunfire and grenades, rendering them immobile and exposed. According to the medal citation, Ruiz sprinted through the waves of gunfire with complete disregard for his own personal safety to defend his teammates in their exposed position.

Ruiz was forced to fight lying flat on the ground due to grenades exploding around him, some only 15 feet from his position. He continued to return fire at multiple enemy locations to prevent enemy fighters from maneuvering toward his teammates.

Refusing to take cover or leave his wounded teammates exposed to potentially fatal shots, Ruiz continued to fight the enemy alone in the courtyard until reinforcements arrived. Once they did, he advanced again through a hail of gunfire, dragged his teammates to a nearby position of concealment and immediately administered life-saving trauma care. Due to the lack of light, Ruiz had to use night vision goggles to administer the care.

“You have made an indelible imprint on Air Force history,” James said to Ruiz prior to presenting the Air Force Cross medal.

Lt. Gen. Brad Heithold, the commander of Air Force Special Operations Command, opened the ceremony by addressing the Airmen and guests who packed the venue’s seats and sidelines.

“This is what ‘right’ looks like,” he said. “This is when Air Commandos from all specialties come out and recognize the heroic deeds of one of our fellow Air Commandos. This is a proud day for Air Force Special Operations Command and for the U.S. Air Force.”

Also in attendance were two of Ruiz’s Army Special Forces teammates on the mission, one of whom Ruiz saved in the courtyard that night.

“I have a great deal of respect for what (Ruiz) and guys like him bring to the fight,” the Soldier said. “It’s always good to know you have guys like that out there with you.” 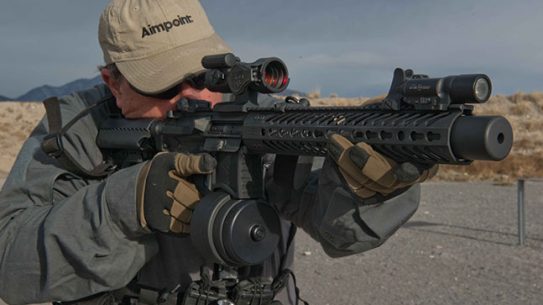