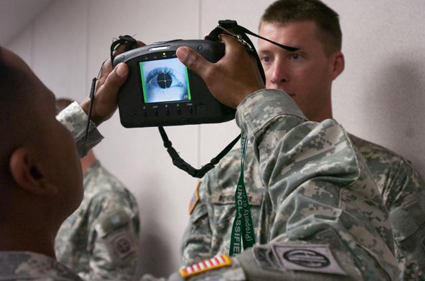 FORT POLK, La. — Using computers and enormous databases, information analysts are better than ever at weaving together a flow of biometric data-mostly fingerprints-collected from the field to identify individual insurgents.

Many of the fingerprints are extracted from bomb-making materials by experts after buildings are cleared by Soldiers, but there aren’t enough experts to do the collecting. The Army thinks the answer may be a well-trained private, as part of the Biometric Intelligence Project, an Army effort to collect, exploit and analyze biometric material collected on the battlefield in order to produce timely and actionable intelligence.

The heart of the initiative is a database with more than 3.1 million biometric records. So far, the system has produced 690 detentions in theater, 18 convictions in the Central Criminal Court of Iraq and has stopped approximately 59 would-be terrorists from entering the United States.

The system can also be used on the battlefield to flag a detainee as a maker of improvised explosive devices.

“Because privates do most of the looking, terrorists need to be smarter than the private,” said Byron Cousin, a retired first sergeant and mobile-training-team assistant leader sent to teach battlefield forensics at the Army’s Joint Readiness Training Center here.

“A private yells, ‘Sergeant, I found an arms cache’ as he’s rubbing his leg. The sergeant says ‘Good job. Army Achievement Medal. Don’t tell nobody you fell in on it,'” he joked with the paratroopers of the 82nd Airborne’s, 1st Brigade Combat Team, during the four-day forensics course.

The paratroopers were taught to use the handheld interagency identity detection equipment, which looks and feels like a professional camera without an attached lens. The device captures images of the face, the iris and fingerprint and was designed for forward units in the field.

Next, the Soldiers moved to hands-on labs at another training site, followed by two days of practical battlefield scenarios. The 40-hour course wraps up with a written test and one final graded scenario, said team leader Bryant Cox, a former Marine combat photographer who has worked in intelligence for many years.

Soldiers learned the basics of battlefield forensics in one of the buildings in a mock, realistic Iraqi village: how to dust and lift latent prints from common household surfaces; to roll prints from detainees; to photograph fingerprints, deceased enemies, detainees and cleared rooms; as well as how to document it all properly.

“You learn not only to look for the basic materials, but to put two and two together,” said Sgt. Clifton Whitley of the 2nd Battalion, 504th Parachute Infantry Regiment, who was retaking the course. “For instance, in one house, a guy may be making something that you think is nothing; in the next house, a guy is making something else; and then there’s a third guy. Individually, there’s nothing there, but you put them all together, and suddenly you have pressure plates for an IED,” he said, suggesting that every team leader at the squad level and above should take the course.

Look in the kitchen for homemade explosives, said Cousin. He asked who had looked inside Iraqi and Afghan refrigerators. A few hands rose.

“You know what I’m talking about then,” he said. “In Iraq, they may have things in there you don’t recognize, but in Afghanistan, you see things that sometimes need to be shot again.”

When the laughter subsided, the Cousin explained that bomb makers are separating components and hiding them in the kitchen, he said.

There will be 29 training events this year, including all of the rotations at JRTC as well as the National Training Center in Fort Irwin, Calif., and Joint Multinational Readiness Center in Hohenfels, Germany.

“The need for trained forensics collectors on the battlefield is immediate,” said Cox. “During the last NTC training cycle we attended, three of the teams in our class were told before they even completed the course that they would have a forensics mission upon arriving in Afghanistan.”

In a well-known, real-life video of a U.S. Soldier shot by a sniper in Iraq, the Soldier’s armor stopped the 7.62mm slug. Following the discovery of the sniper’s rifle, numerous bare-handed Soldiers handled it, obliterating the shooter’s fingerprints. No chain of custody was documented, and the weapon was not packaged for most of its travel to the forensics lab.

However, after hours of meticulously dismantling and processing the weapon, forensics techs thinking outside the box developed many latent prints left on the rifle by the sniper. The sniper was positively identified three years later.

“Fingerprints are forever,” Cousin said. “Finding and documenting this biometric data is a way for you to serve long after you’re out of the Army,” he said. 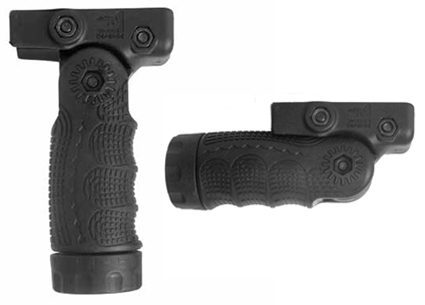