The Pennsylvania State Police released dash cam footage showing the tense gunfight that nearly claimed the life of one of its troopers last year. Watch it above.

According to WFMZ, on Nov. 7, 2017, State Trooper Ryan Seiple pulled over 22-year-old Daniel Clary for speeding on Route 33. Seiple gave Clary a ticket. He then got into his cruiser and started to pull away when Clary flagged him down.

The more Seiple talked with Clary, the more he began to suspect the motorist was driving under the influence. The trooper later testified that he saw a can of air freshener spray which he suspected was used to mask the smell of marijuana. He also said he saw what looked like shavings from a hollowed-out cigar used to store marijuana, the Pocono Record reported.

Seiple called for backup, and Trooper Seth Kelly arrived on the scene. The two troopers proceeded to administer a sobriety test on Clary.

The video above starts off with Clary unable to keep his balance. When the troopers move to arrest Clary, he resists, sparking off a physical confrontation that spills out onto the road as traffic drives by.

While Clary is on the ground, one of the officers discharges a Taser. The two men then attempt to arrest Clary, but he continues to resist and behave belligerently.

During the struggle, Clary manages to get up. He then runs to the driver’s side window, reaches in and pulls out a gun.

That’s when a gunfight erupted. The video clearly shows Clary shooting on the officers, and the officers returning fire. The Morning Call reports that Clary fired six rounds, while Kelly fired 21 rounds and Seiple fired 20 rounds.

Clary then gets into his car and speeds away.

LehighValleyLive says Kelly was shot four times, including once in the femoral artery in his thigh. He was clinically dead when he arrived at a local hospital. Overall, he spent 12 days in a medically-induced coma and 25 days in the hospital. He has no memory of the gunfight. Seiple sustained minor injuries.

Northampton County First Deputy District Attorney Terence Hock said he could have stopped the release of the dash cam video, but he, the troopers and their families felt it was important that the video be released in order to show how quickly police work can turn deadly.

“We think the community should see it,” Houck said.

Clary was convicted on June 29 of a variety of felonies, including attempted murder of Seiple and Kelly. His sentencing is scheduled for Aug. 31. 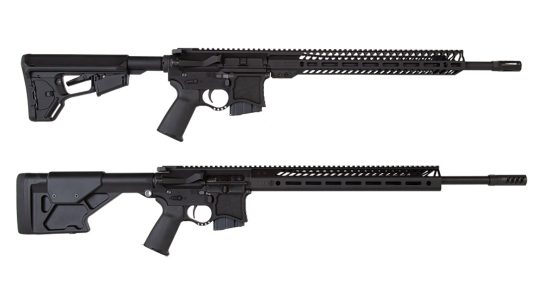 Seekins Precision is the latest company to release a complete rifle chambered in .224...