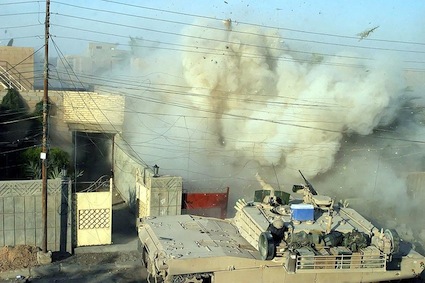 A US Marine Corps (USMC) Marine M1A1 Abrams Main Battle Tank (MBT), 2nd Tank Battalion (BN), fires its main gun into a building to provide suppressive counter fire against insurgents who fired on other USMC Marines during a fire fight in Fallujah, Al Anbar Province, Iraq. These Marines are participating in Operation AL FAJR, which is an offensive operation conducted against Iraqi insurgent forces as part of a Security and Stabilization Operation (SASO) carried out during Operation IRAQI FREEDOM. (Released to Public)

The M1 Abrams tank has survived the Cold War, two conflicts in Iraq and a decade of war in Afghanistan. No wonder – it weighs as much as nine elephants and is fitted with a cannon capable of turning a building to rubble from two and a half miles away.

But now the machine finds itself a target in an unusual battle between the Defense Department and lawmakers who are the beneficiaries of large donations by its manufacturer.

The Pentagon, facing smaller budgets and looking towards a new global strategy, has decided it wants to save as much as $3 billion by freezing refurbishment of the M1 from 2014 to 2017, so it can redesign the hulking, clanking vehicle from top to bottom.

Read the rest of Aaron Mehta and Lydia Mulvany Center for Public Integrity via MSNBC.