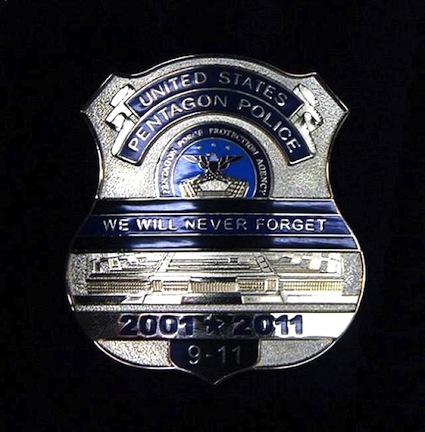 It’s nearly impossible to locate a single, agreed-upon origin story for most police badges. Research will yield a number of descriptions and histories of specific badges, most of which reflect the culture and history of the department and the community it serves. That’s certainly the case with the standard badge issued to all Pentagon Police Department officers when they join the Pentagon Force Protection Agency team. The badge features, among other things, an illustration of the Pentagon, a raised ”U.S.,” and the agency’s crest.

But Pentagon Police Lt. Shane Hillard, with input from others in the department, designed a badge to commemorate the 10th anniversary of the 9/11 terrorist attacks and Pentagon Force Protection Agency Director Steven Calvery approved it for wear.

The badge is optional for wear by all Pentagon Force Protection Agency law enforcement officers. So far, Hillard said, about 50 percent of the Pentagon Police Department’s officers have chosen to purchase and wear the badge, for which they pay about $65.

Pentagon Police Chief Richard Keevill is among those choosing to wear the badge. On Sept. 11, 2001, Keevill commanded the Virginia State Police Barracks serving the part of Northern Virginia that includes Arlington County and the Pentagon. He was on the scene at the Pentagon within minutes of the plane’s impact.

“It was my generation’s Pearl Harbor,” Keevill said. “I saw a lot of horror that day, but I also saw the best of our nation that day.

“This badge honors those who died and those who risked so much in the aftermath. It’s also a testament to how seriously the agency takes its mission of preventing something similar from happening again in the future.”
For Officer James Ryan, who could see the Twin Towers from where he grew up in New York and who later worked at the World Trade Center, the badge has personal significance.

But he said the badge also means something special to his wife.

“When I showed her the badge, her eyes lit up,” he said. “She has family in [the New York City Fire Department]. She said it means a lot to her considering all the people she lost that day and how proud it makes the family of the position I hold.”

He was an Air Force military policeman that day and was on an aircraft bound from Savannah, Ga. to Wisconsin when the attacks occurred. His plane was diverted to Tennessee and was delayed for a day before being allowed to return home.

“The badge represents an understanding of the significance of that date,” Repass said. “It honors those who died that day, and reaffirms what the sacrifice of those people means to this agency.”

Army chief of staff, Gen. Ray Odierno: Leaving too many troops in Iraq a risk.

It's nearly impossible to locate a single, agreed-upon origin story for most police badges.…