The self-described “Jihad Jane” who thought her blond hair and blue eyes would let her blend in as she sought to kill an artist in Sweden is a rare case of an American woman aiding foreign terrorists and shows the evolution of the global threat, authorities say.
The suburban Philadelphia woman, Colleen R. LaRose, is accused in the indictment filed Tuesday of actively recruiting fighters, as well as agreeing to murder the artist, marry a terrorism suspect so he could move to Europe and martyr herself if necessary.
LaRose is “one of only a few such cases nationwide in which females have been charged with terrorism violations,” said U.S. Department of Justice spokesman Dean Boyd.

LaRose, 46, of Pennsburg but with close ties to south Texas, has been held without bail since her Oct. 15 arrest in Philadelphia.
Authorities said the case shows how terrorist groups are looking to recruit Americans to carry out their goals.

“Today’s indictment, which alleges that a woman from suburban America agreed to carry out murder overseas and to provide material support to terrorists, underscores the evolving nature of the threat we face,” said David Kris, assistant attorney general for national security.

LaRose had targeted Swedish artist Lars Vilks and had online discussions about her plans with at least one of several suspects apprehended over that plot Tuesday in Ireland, according to a U.S. official speaking on condition of anonymity because the official wasn’t authorized to discuss details of the investigation.

A U.S. Department of Justice spokesman wouldn’t confirm the case is related to Vilks, who angered Muslims by depicting the Prophet Muhammad with the body of a dog. At least three Swedish newspapers published the cartoon Wednesday, arguing that it had news value or was a free-speech symbol.

The indictment charges that LaRose, who also used the name Fatima LaRose online, agreed to kill the target on orders from the unnamed terrorists she met online, and traveled to Europe in August to do so. Court documents don’t say whether the person was killed, but LaRose was not charged with murder. 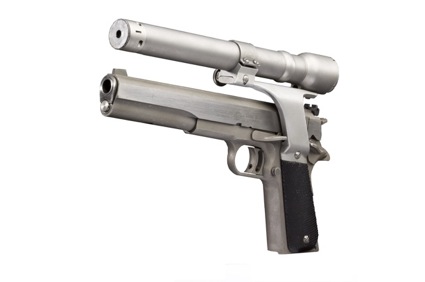 The making of the Terminator’s laser-sighted .45 AMT Longslide.