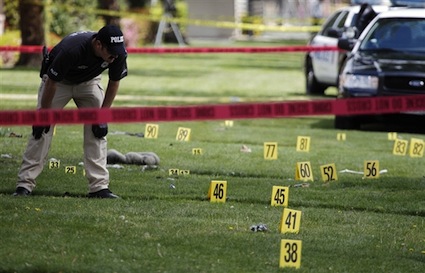 A police officer inspects the crime scene on Friday, a day after a standoff left a deputy dead in Modesto, Calif. The standoff began Thursday morning after gunfire broke out as two Stanislaus County deputies went to the Whispering Woods development to serve an eviction notice. Marcio Jose Sanchez / AP

The suspect in the killing of a sheriff’s deputy and locksmith during an eviction had a gas mask and was armed with several weapons, including a high-powered assault rifle, and other weapons when his body was found in the burnt ruins of an apartment building, police reported Saturday.

“Investigators also found that the man was wearing a ballistic vest which strongly suggests that the man barricaded himself in the apartment and was preparing himself for an armed confrontation with police,” said Modesto police spokesman Sgt. Brian Findlen.

The shooting led to a day-long standoff that ended Thursday night when the four-unit apartment building caught fire. On Friday, authorities recovered a badly burned body that has not been positively identified. But they said the male is the suspect in the slayings. 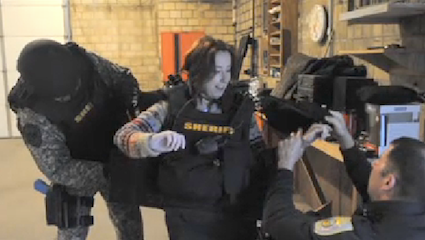 A police officer inspects the crime scene on Friday, a day after a standoff…