Footage of the 2016 shooting of a South Carolina police officer has been released, and additionally helped secure a sentence of 35 years for the suspect.

In January 2016, Estill police officer Quincy Smith responded to a call regarding a man harassing patrons of a local store. En route to the location, Smith switched on his camera-mounted glasses himself that he had purchased himself. He testified “that the goggles were the best $30 he ever spent,” according to the 14th Circuit Solicitor’s Office.

The glasses ended up recording a horrifying scene. As Smith approached suspect Malcolm Orr and ordered him to remove his hand from his pockets, Orr pulled out a handgun and fired off eight shots. Four of those shots hit Smith, according to reports.

“Tell my family I love them,” Smith can be heard saying in the aftermath of the shooting.

Bullets broke two bones in Smith’s arm, severed a vein in his neck, and passed through his upper torso.

But Smith survived the encounter and the body cam ended up serving a greater purpose. The footage was used in court and resulted in a brief 45-minute jury deliberation before a guilty verdict was rendered. Orr was sentenced Friday to the maximum of 35 years for attempted murder and possessing a weapon in a violent crime, according to reports.

You can watch video of the police officer shooting above. 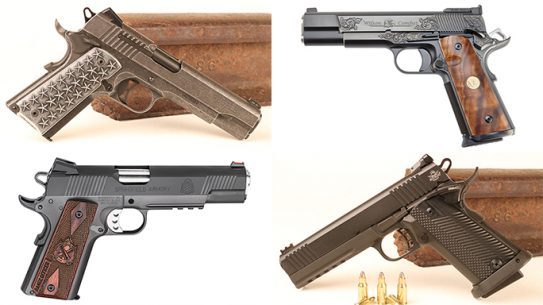 Traversing the 1911 pistol economic landscape from affordable to nuts, and all the impressive...