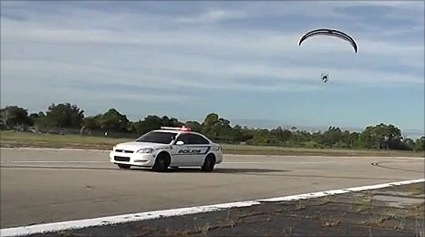 Parajet, based in Mere, FL has taken an order from the Palm Bay Police Department for two of its paramotors.

“This is probably the best commercial use I’ve heard of so far for a paramotor,” said Parajet’s managing director Jim Edmondson.

“About a year ago we lent them the paramotors to try out and they fell in love with it and that’s how the order came about.”

The powered paragliders weigh just 50lbs and consist of a parachute-style “elliptical wing” and a compact 22hp motor that’s carried on the pilot’s back.

Categorised as ultra-light aircraft, the customised paramotors are being used by the Atlantic Coast-based police to patrol the vast “densely vegetated countryside” surrounding Palm City.

“At the moment there are two active policemen flying and the major benefit for them is that it’s an aircraft that can fit into the boot of their patrol cars,” explained Mr Edmondson.

“They don’t use it to apprehend a suspect because you can’t land a paramotor and then run after somebody.

“But so far they’ve found several stolen vehicles and even though it’s slower then a car – it can be used to track a car and direct other police cars via radio.”

For the Palm Bay Police Department it’s a “clever response to the escalating costs of helicopter use”.

“We don’t have enough activity to support the cost of a helicopter and so we were looking for an alternative,” said Lt Joe Eakins.

“The power paraglider has a low acquisition cost, low operating cost and can be put into the back of a patrol car – so we thought it would be an ideal aerial unit.

“So far we’ve used it to search for a serial arsonist, several wanted individuals and marijuana grow field operations.

“And what would have taken two to three hours with 10 guys on foot – we were able to do with one power paraglider and one person in less then 30 minutes.”

Parajet, based in Mere, FL has taken an order from the Palm Bay Police…