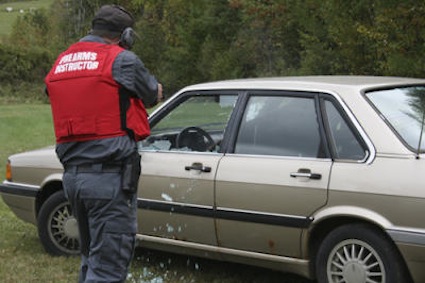 A car door will not stop a bullet.

Members of the Bennington Police Department knew that, but Monday’s firearms training at the Hale Mountain Fish and Game Club shooting range drove home the point.

More than half a dozen officers gathered in the morning and conducted firearms drills on an old car donated by Le Blanc’s Auto Recycling.

Police also reviewed which angles on the car make better cover during a gun fight and which places aren’t so good. Behind the doors, for instance, are not a good place to be if one is being shot at, despite what’s depicted in action movies.

They started the morning using “Simmunition,” a type of paint bullet that is used along with a special barrel subbed into the officer’s normal gun. Police Chief Paul Doucette and Detective David Rowland, who serve as the department’s firearms instructors, acted as armed suspects while other officers performed traffic stops and building entries.

Doucette said if the officers said the right things and made the correct movements, he and Rowland surrendered. If they didn’t give the right commands or turned their backs, a Simmunition fight broke out.

Thick clothing takes most of the sting out, he said, but the fact that the bullets hurt and can draw blood on bare skin makes the officers focus a little more and take the training seriously.

He said the main purpose of the session was to train with the new firearms that had been issued two months ago. The Sig P220R .45 caliber is an improvement over the old sidearm, the Sig P229, for a number of reasons, he said.

One is that the new models have a “tactical rail,” a groove along the underside of the barrel where a small flashlight is mounted. Doucette said it frees up the officer’s hand when they need both a gun and a light, plus it has a strobe feature, which confuses suspects. 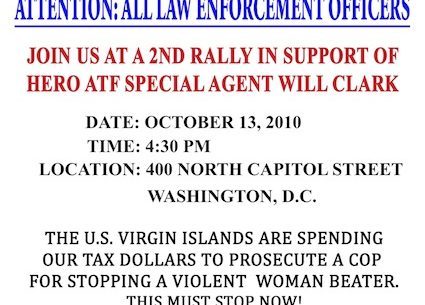