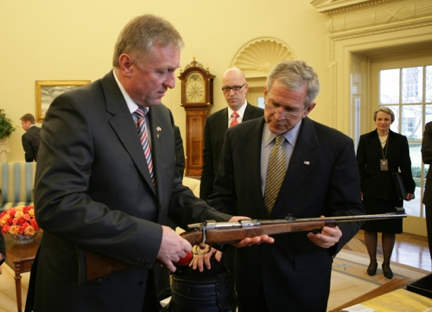 CZ (Ceska Zbroiovka) got an unusual request from the Mr. Mirek Topolanek, Prime Minister of the Czech Republic. He ordered a rifle specifically embellished for the President of the United States that was presented Tuesday as a gift during his visit. CZ produced a unique rifle based on the 550 model that has earned respect as both a tactical and hunting platform. President Bush’s rifle was chambered in .308 Win and handed over last March.

“The artistic treatment of the rifle intended for the U.S. President was commissioned to our ‘court’ engraver Mr. Rene Ondra,” states CZ General Manager Lubomir Kovarik. He adds, “The complete production of such a weapon takes approximately 200 hours devoted to engravings and gunsmith’s work employing procedures which are passed from father to son. The barreled-action proper was made in around 6 weeks.”

As a testament to the heritage and craftsmanship if CZ employees, a great deal of the rifle displays hand engraving and fine details. The embellishments include President George W. Bush’s initials inlaid with pure gold and an inscription indicating the rifle was presented as a gift by Prime Minister Topolanek. A hunting motif is finely engraved in a New England style and the action is set in Canadian walnut that was capped at the forend with a beautiful briarwood.

President George W. Bush is the most recent in a long line of presidents here in the U.S. who has received firearms as gifts. Other Presidents include George H.W. Bush, Ronald Reagan, Lyndon Johnson, Dwight Eisenhower, Franklin Roosevelt, Theodore Roosevelt. Possibly considered the most elaborate firearm presented to a President went to Thomas Jefferson, a jeweled wheellock that sits encased at the Senator John Heinz History Center of Pittsburgh, PA.