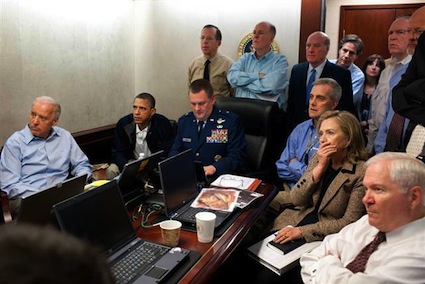 If Osama bin Laden had surrendered to the Navy SEALs, President Obama was prepared to put the al Qaeda leader on trial in a federal court, the president told journalist Mark Bowden in a November story in VANITY FAIR based on an adaptation from Bowden’s pending book THE FINISH.

“We worked through the legal and political issues that would have been involved, and Congress and the desire to send him to Guantánamo, and to not try him, and Article III ,” the president told Bowden. “I mean, we had worked through a whole bunch of those scenarios. But, frankly, my belief was, if we had captured him, that I would be in a pretty strong position, politically, here, to argue that displaying due process and rule of law would be our best weapon against al-Qaeda, in preventing him from appearing as a martyr.”

The information comes along with some new details about the planning for the raid, including that Michael Morell, the head of the C.I.A.’s bin Laden team – who had been part of the wrong CIA analysis concluding that Saddam Hussein had weapons of mass destruction – thought the it was an iffier proposition that bin Laden was in the Abbotabad compound.

If Osama bin Laden had surrendered to the Navy SEALs, President Obama was prepared…