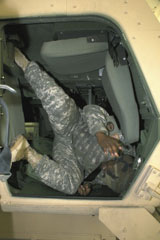 Fort Lee, Va.– By the end of 2006, nearly 125 Soldier fatalities and 140 injuries were the result of Humvee rollover accidents, according to Army statistics.

Rollovers have become such a rampant problem in Afghanistan and Iraq that the Department of Defense decided to do something about it.

The result is the Humvee Egress Assistance Trainer, one of the Army’s top inventions of 2007.
The HEAT is a simple yet sophisticated training module that represents an up-armored Humvee.

The purpose of the training, which was deemed mandatory for every enlisted Soldier since September 2007 by the DoD, is to simulate a Humvee rollover.

Accidental rollovers create fatalities when Soldiers cannot escape – or egress – the flipped vehicle before water enters through the gunner turret, fire spreads within the vehicle or Soldiers trapped in the Humvee are fired upon by the enemy.

The HEAT aims to change the way Soldiers react in a rollover situation from one of sheer panic to an instinctual and confident exit from the vehicle.

At Fort Lee, the HEAT has been in use since October 2007. The HEAT is an updated model, with combat locks on the doors, as well as mock ammo cans, radio and other items that would get tossed around in a real rollover.

The main objective behind the training is to teach Soldiers not to panic, gather their wits and get out.

The Army standard for an egress is 20 seconds, but Howard pushes the Soldiers to open the doors, unhook their seat belts and escape within 17 seconds.

“Open the door naturally,” Howard briefed a group of supply specialist Soldiers, here for the Basic Noncommissioned Officer Course, before they stepped into the HEAT. “Push (the combat lock) up toward the sky.”

The instructions sound easy enough to follow but the experience throws the occupants for a loop. All of sudden down is up, things become counter-intuitive and a feeling of disorientation kicks in.

In groups of four, Soldiers have two chances at escape. On the first run, Howard rolls the HEAT 25 degrees to one side, then 30 degrees to the other side. This is what is known as a critical rollover point. Howard then flips the HEAT a full 180 degrees. The Soldiers are upside down, hanging out of their seat and their heads against the roof (which is now the floor). The seat belt secured across the lap and chest is the one thing keeping the Soldier somewhat in place.

On the second go around, Soldiers are flipped 360 degrees, three times, before the module comes to a complete stop upside down.

“It’s a perfect simulation,” said Staff Sgt. Towaski Christion. “You have to push yourself up with one hand,” he said, “and try to open the door with the other and then find the button for the seat belt.”

The up-armored mock-up can be a claustrophobic’s nightmare. The cramped interior leaves little room to maneuver, especially when upside down and in a panic.

“You do it enough times, instinct takes over,” said Staff Sgt. Christopher Balafas. “But it’s a very chaotic environment when you flip.”

The training is serious and could save a Soldier’s life by making occupants of a Humvee rollover, as Howard put it, “awake and focused.”