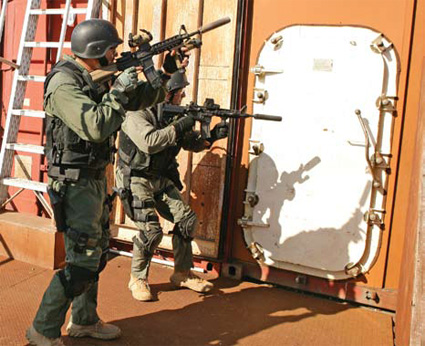 Police and military tactical teams can now look through thick walls to spot, count and evaluate who’s inside buildings and interior rooms before kicking doors and carrying out their missions.

These through-wall views come courtesy of Camero USA Corporation and its two high-tech devices called the Xaver 400 and Xaver 800. These portable units use ultra-wide-band microwave radar beams to probe what’s behind exterior and interior walls, or above and below ceilings and floors. The Xavers “see” through all these barriers, whether they’re made wood, clay brick, cinder block, reinforced concrete or plastered dry wall. In fact, metal sheeting is the only barrier that foils the Xavers.

The Xaver 800—designed for ISR (intelligence, surveillance and reconnaissance) work—is a one-man-portable unit that weighs about 33 pounds and measures 19-by-19-by-6 inches. An operator needs less than a minute to set it up on a tripod near an exterior wall. After punching the Xaver’s “on” button, the tactical team waits only about 15 seconds for 3D images from as far as 66 feet inside. 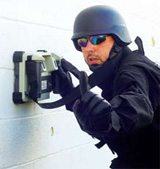 The Xaver 400—designed for tactical and special-forces operations—is a hand-held unit that weighs 6.5 pounds and is about the size of a laptop computer. After the operator moves into position and presses it to the wall, the Xaver 400 provides 2D images up to 26 feet away.

Because the Xaver 800 employs a larger, more advanced computer than the handheld Xaver 400, it can deliver high-resolution three-dimensional views. The Xaver 800 also has a larger antenna to scan deeper into a building’s interior.

Xaver’s Nuts And Bolts
The devices display a grid system to map the interior and show its shape. They also place real-time images onto the grid to help assess which rooms are occupied, and whether the people are moving or stationary, or behind interior walls, cabinets, desks or furnishings. And because the Xavers use microwave-radar technology—not thermal imaging—the devices can locate victims trapped in burning or smoldering rooms, making these units ideal for firefighting and search-and-rescue operations.

The Xaver devices send out a radar signal that goes through the walls, bounces off people (or pets) and interior structures, and returns to the Xaver unit to be interpreted. Using Camero’s advanced algorithmic solutions, the Xaver assesses how the signal “mutated” during its short journey, to reconstruct an image of what’s inside.

Plus, because the devices emit only 1 or 2 percent of the radiation put out by most cell phones, they can be used in crowded urban environments without harming bystanders. Even so, the Xaver units aren’t the stuff of Hollywood movies. At least not yet.

“While we can get very, very useful returns from this type of radar, it’s not video,” said Dirk Vandervaart of Camero USA. “There’s nothing optical. The screen’s icons and displays are consistently lifelike, and they approach video-game quality, but these aren’t pictures of actual people. You can’t see the color of their shirts. This is radar technology. It’s not Hollywood and James Bond.”

Endless LE Applications
Because of their many applications, the Xavers are expected to save time, money and lives wherever they’re deployed. The Xaver 800 was released in 2007 and the Xaver 400 was expected to go afield by late May 2008.

Vandervaart said the Xaver 800 has already been used by metro S.W.A.T. teams during call-outs, and a U.S. Stryker team has been testing and evaluating a Xaver while training at Fort Lewis, WA, in preparation for Iraq. Both Xaver models will also be field-tested during the upcoming Air Assault Expeditionary Force Experiment at Fort Benning, GA. Troops will operate the Xavers to see how they hold up, and to learn how they benefit the troops.

Not only can the Xaver help tactical teams assess what’s behind most doors and walls, it can also tell them if adversaries have fled. “Imagine how much time and money a S.W.A.T. team saves if it can quickly determine that a room or building is empty,” Vandervaart said. “They’ve already cleared the area and evacuated homes and businesses within the perimeter. The sooner they give the all-clear, the sooner that area returns to normal.”

Spinoff Technologies
Camero is also working with the military to incorporate IFF (Identification of Friend or Foe) technology into the Xaver devices to pinpoint “good guys” behind a wall or obstacle. “We’re working to develop several spin-off technologies that mesh with Xaver,” Vandervaart said.

In the meantime, Camero is helping police and military units discover the best way to work with the Xavers. “This is such new technology that we’re creating tactics, techniques and protocols on how best to deploy them,” Vandervaart said. “Teaching people how to use the Xaver only takes about two hours of lecture time and about four to six hours of training at a test site and working through some exercises. After that, the real excitement starts.”