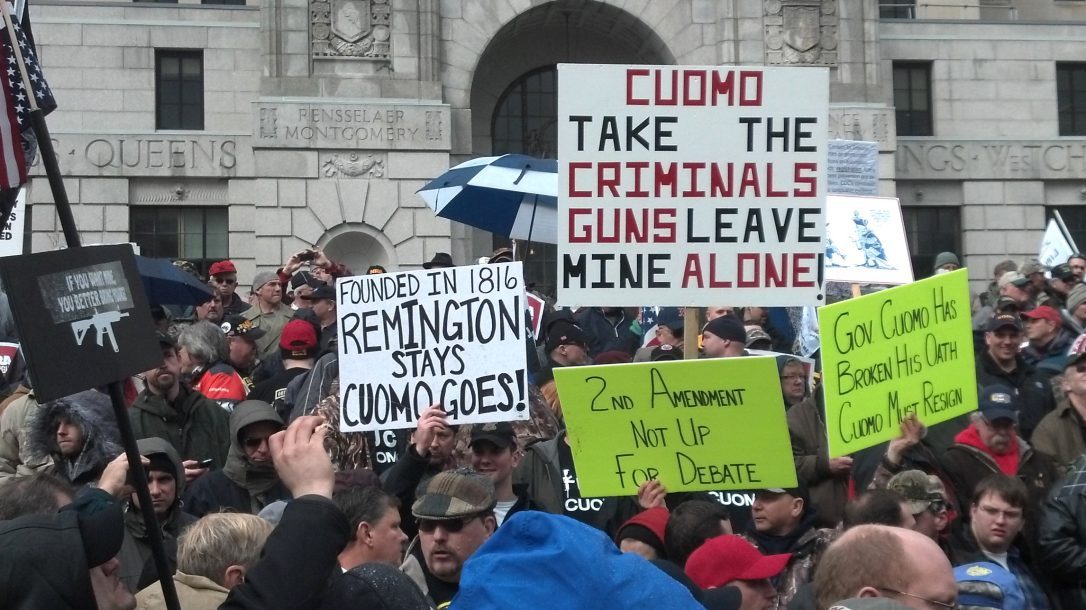 They descended upon the Capital from all corners of the state from Long Island to Buffalo for the third and largest gun rights rally held so far to protest the enactment of the NY SAFE Act on January 15. Albany Police estimated the crowd numbered 7,000-11,000 and longtime observers of Albany politics reported it was easily the largest protest they have ever seen. Organized by the New York State Rifle and Pistol Association, the February 28 event was the fifth annual Lobby Day where gun owners are encouraged to meet with their state senators and representatives and rally in support of the Second Amendment. This event, however, was much larger in scale and intensity.

The sentiment of the demonstrators echoed what is occurring all over America: firearms ownership is about freedom, gun control is a failed solution to crime, and the acts of a few madmen and criminals do not justify sacrificing the rights of the law abiding.

The anger felt by protestors at this rally was especially palpable not only because of the severity of the NY SAFE Act, but the way it was enacted through secret back-room negotiations between Senate Republican leader Dean Skelos and the Governor. The NY SAFE Act bypassed the mandatory three-day period by which all bills must age with legislators and be disclosed to the public before being voted on because the governor invoked a “message of necessity” intended to be used only for emergencies. Once the Cuomo-Skelos deal was struck, the 39-page bill was printed and Senators were given between 15 to 90 minutes in the late evening to read it before the pre-ordained vote was taken. The following day, the democratic controlled Assembly passed the measure and it was signed into law. In only two days of legislative action and without any public hearings or debate, New York easily became the state most hostile to the Second Amendment.

NRA President David Keane and NYSRPA President Tom King were the high liners of several speakers who addressed the crowd on the lawn outside the capital. King, who also sits on the NRA Board and is running for a new term this year, chastised Cuomo relentlessly not only for usurping the Constitutional Rights of New Yorkers, but also for proposing an exemption to the law for Hollywood filmmakers. King told me “The passage of the draconian SAFE Act has awoken a sleeping giant who will not be satisfied until its rights are restored”. King also explained that the NYSRPA is about to file a lawsuit seeking to overturn the SAFE Act. (editor’s note: To contribute to the legal defense fund for this case that may very well be decided by the Supreme Court, see www.nysrpa.org) 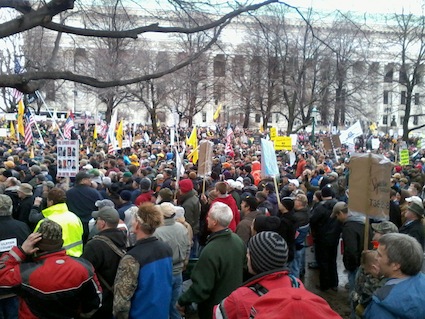 The NY SAFE Act goes beyond the gun control laws of any state in several areas. Possession of magazines that hold more than 10 rounds is a crime as is loading them with more than 7 rounds. Semi auto rifles with detachable magazines and one “military feature” must be registered and cannot be transferred to anyone (even through a will) except to a dealer, police or out of state. Thus, a Ruger 10/22 with a thumbhole stock is now an “assault rifle” and civilian ownership of these firearms will be permanently diminished as their owners pass. Only the government will be able to legally own them.

Unlike most organized protests in Albany where attendees are bussed in with promises of free food and transportation paid for by lobbyists or public employee unions, this was a true grass roots event. Members of the Appleseed Project, Oath Keepers and other Second Amendment organizations showed up in strength, some holding signs comparing Cuomo to Hitler and protesting the hypocrisy of Cuomo being protected by security with the same guns and magazines that he outlawed. A large group of women rallied together, angered that the law would make them less capable of self-defense. Two held a sign stating “I need over 7 rounds. Rapists are harder to kill than deer” in reference to the Governor’s seven-round magazine limit and his claim that “no one needs 10 bullets to kill a deer.” Flags with an AR-15 and the words “Come and Take It” and signs stating “First Gun Control, Then Total Control” were defiantly waved as the energized crowd chanted “we will not comply.”

Two young men at the January 19 rally drove 4.5 hours from Hornell. One of them missed his twins’ birthday’s celebrations to make the trip. “I did it for them, and though they were upset that I could not be there, they understood,” he explained while holding a yellow “Don’t Tread on Me” flag. Factory workers from Remington Arms located in Herkimer County also attended. 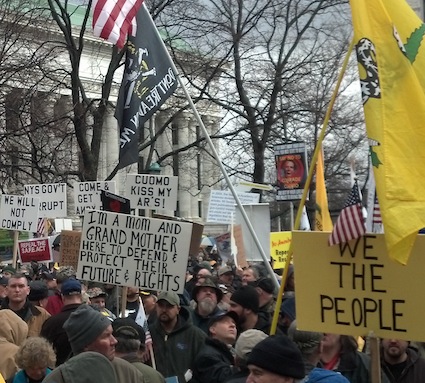 One protester seemed to sum up the day: “the politicians who bypassed the democratic process and have destroyed our Constitutional Rights have not heard the last from us. We will work to remove them from office no matter how long it takes.” 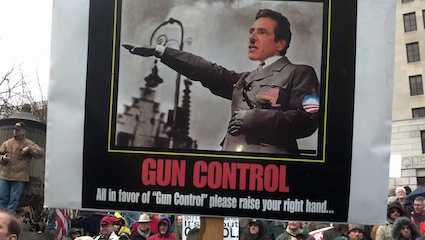 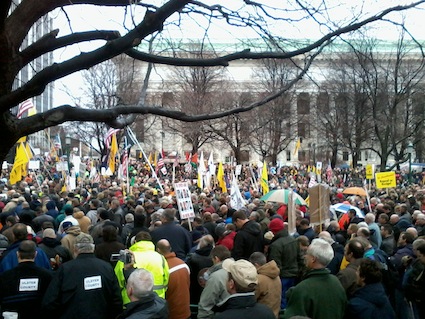 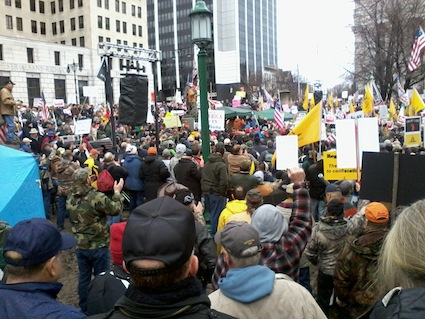 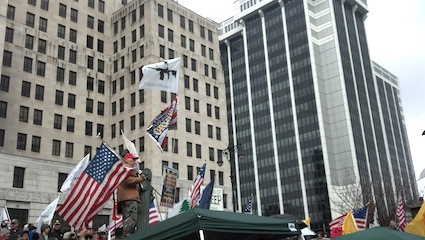 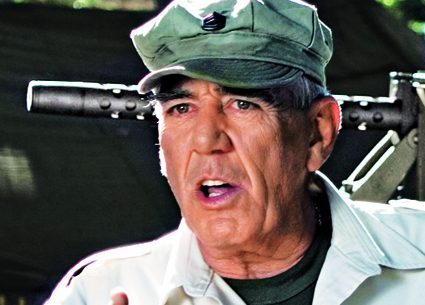