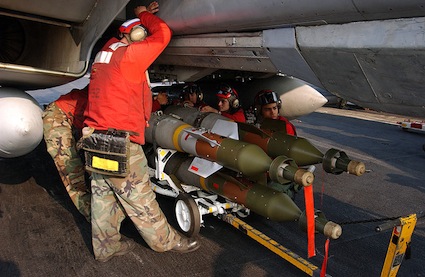 “Paveway™ has revolutionized tactical air-to-ground warfare by providing the warfighter unparalleled accuracy and standoff capability, proving itself in every major conflict in which it has been used,” said Dr. Taylor W. Lawrence, Raytheon Missile Systems president. “This contract further demonstrates Raytheon’s long-standing commitment to its international customers.”

Raytheon continues to evolve Paveway™ to meet the needs of the U.S. armed forces as well as allied nations. Newer versions of Paveway™ include Global Positioning System/Inertial Navigation System guidance capabilities, which combine the precision and flexibility of traditional laser-guided weapons with the all-weather capability of GPS guidance, resulting in a weapon that decreases the required sortie count and weapon inventory while simultaneously increasing the mission success rate.

About Paveway™ The Paveway™ family of laser-guided and GPS and laser-guided bombs has revolutionized tactical air-to-ground warfare by converting “dumb” bombs into precision-guided munitions. Bombs equipped with Paveway™ kits have been put to the test and proved themselves, time and again, as the weapon of choice by 43 customers. Paveway™ laser-guided bomb kits comprised more than half the air-to-ground precision-guided weapons used in Operation Iraqi Freedom, Enduring Freedom and Unified Protector.