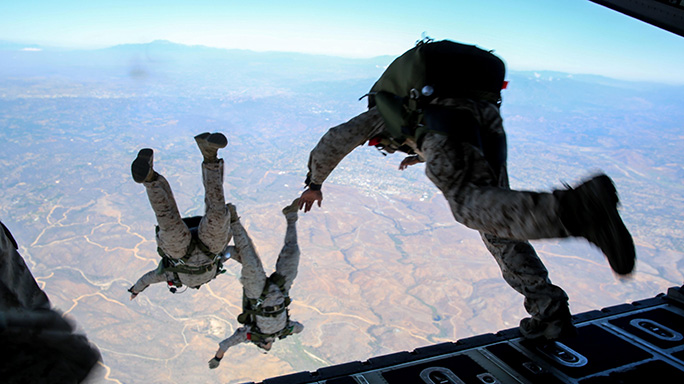 Marines with Force Reconnaissance Company and Reconnaissance Training Company, 1st Reconnaissance Battalion, 1st Marine Division, jump from a C-130J Super Hercules aircraft during High Altitude – High Opening parachute insertion training over Marine Corps Base Camp Pendleton, Calif., Sept. 17, 2015. The goal of the training was to sharpen a skill set that is of great advantage to expeditionary forces, allowing the jumpers to infiltrate locations where access would be too difficult for vehicles.
(Photo by Pfc. Devan Gowans)
Comment(s)

The following is a release from Pfc. Devan Gowans, I Marine Expeditionary Force:

The Marines took to the sky in a C-130J Super Hercules aircraft, outfitted with parachute setups for different types of air insertion, including High Altitude – High Opening and low-level static line jumps.

The goal of this training is to master tactics that are of great advantage to expeditionary forces, because it allows the jumpers to infiltrate locations where access would be too difficult for vehicles.

“These skill sets can be used for different types of raids, where we can employ the use of a full combat load in situations such as raids or deep ground reconnaissance missions,” said Sgt. Trevor Pace, an assistant team leader with Force Reconnaissance Co. “In HAHO configurations, these parachutes have the ability to carry men and gear for great distances, allowing us to extend our reach and do so stealthily.”

At an altitude of approximately 10,000 feet, the Marines stood up and shuffled to the cargo door. After receiving the command, they exited the aircraft in teams and navigated their way safely to the drop zone by parachute.

“The military freefall portion is a platform that is used for deep insertion” said Sgt. Carlos CamachoRojas, the drop zone safety officer with 1st Reconnaissance Bn. “This is a clandestine procedure that is used for situations where it would be crucial for the jumpers to maintain a level of secrecy.”

Following HAHO procedures, the plane collected teams of static line jumpers and climbed to 1,250 feet to perform the low-level portion of the training. A row of jumpers connected their parachutes to a cable inside the cargo bay of the C-130J aircraft.

The Marines’ parachute canopies deployed automatically and allowed for their organized descent back to the ground.

Maintaining consistency with this type of training is essential to ensure Marines are efficient while they’re airborne, said Pace.

“Being able to jump often is crucial because it’s a very difficult skillset to sustain” said Pace. “It’s important for me to be able to perform my duties when I am called on to do so. In the air, cohesion between the jumpers in the stack and under the canopy keeps everyone on the same page and allows us to work together.”

Parachute training conducted by Force Reconnaissance and Reconnaissance Training Company improves the mission effectiveness of the Marines by increasing their operational reach and giving them another effective method of insertion into deployed environments. 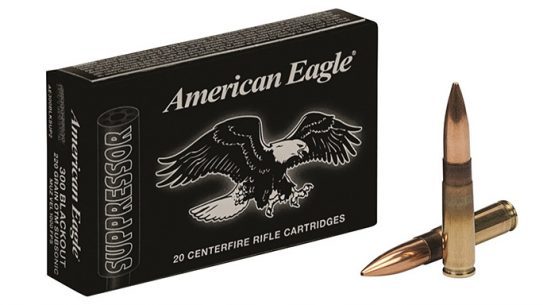