by Jack Satterfield
in News
0

Budgets matter. Simply viewed, budgets are estimates of resources available to cover planned expenditures. That’s just the start, however. At the national level, budgets are roadmaps of future of policy options. Nowhere is this characteristic clearer than in the Department of Defense, where every budget decision shapes national security strategy and policy.

The Obama administration’s recent announcements about the defense budget lay out guidance for programs and operations that could and probably will affect strategy and policy for decades to come. Everyone, not just military professionals, should understand the implications of Defense Secretary Robert Gates’ priorities for spending, since they will have a measurable impact not only on the ways our armed forces conduct business, but also because they will touch economic, social and diplomatic areas as well.

National security policy is the country’s highest priority and engenders more rabid debate than almost any other issue. America has enjoyed far less than consistent success in its defense posture. For decades after World War II, U.S. defense policy at least nominally used that experience as the planning paradigm: The armed forces configured its manpower and resources to fight two simultaneous major conventional wars or a large conventional war on two major fronts. The two-front mobilization model worked very well in World War II, but in subsequent conflicts it clearly was not adequate.

The Korean conflict involved numerous constraints to keep the war contained on the peninsula, and Cold War politics and policies kept U.S. forces pinned down in Europe. President Eisenhower’s New Look strategy acknowledged the futility of maintaining a large conventional force, given the upward spiral of costs for more sophisticated military technologies, and relied heavily on the deterrence of nuclear weapons to uphold U.S. interests around the world. 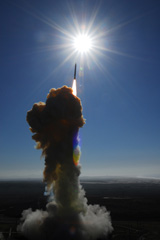 Although intelligence estimates proved contrary, John F. Kennedy owed his presidential victory in part to his claim that the U.S. had a smaller nuclear arsenal than the Soviet Union—the “missile gap” reassured voters that Democrats would not slack on national defense. The Vietnam debacle followed, and America discovered that it could not achieve victory by bombing a Stone Age country into the Stone Age. Surgical applications of technical superiority could not overcome popular will in Vietnam, and as U.S. POW James Stockdale noted, “The language of war cannot be faked.”

The U.S. military suffered for a decade from pervasive malaise after Vietnam, compounded by President Carter’s sweeping defense cutbacks. The Reagan administration reversed this trend, deliberately spending vast sums to bankrupt the Soviet Union, a mission accomplished during George H. W. Bush’s term in 1991, just after the first Persian Gulf War, when overwhelming U.S. force amassed over months of preparation decimated Iranian units in 100 hours. American military technology created during the Reagan spending spree proved its superiority in tactical applications, but Bush began to cut the flow of money once the Cold War ended. Throughout the Clinton administration, defense remained a less urgent priority, and that view carried through into the second Bush presidency until 9/11. The Global War on Terrorism quickly expanded beyond incursions against the Taliban in Afghanistan into the second war in Iraq and consumed vast sums for operations. As the war in Iraq, now in its seventh year, has dragged on, the cost approaches $700 billion (with another nearly $200 billion in Afghanistan as of this writing) and may well top $1 trillion before the U.S. completes the scheduled force drawdown from Iraq in 2011. In the meantime, action in Afghanistan is ratcheting up.

In this context, budget decisions that set the course for the next decade of defense procurement and operations are critical. In April, Defense Secretary Robert Gates announced  changes that reflect a reality obvious to most people but almost revolutionary from the standpoint of national security precedents: Gates’ decisions reflect the absence of any perceived major power threat to the U.S. For the first time in decades, the nation is basing decisions about advanced technology weapon systems on immediate military problems not worst-case scenarios based on assessments of current and potential capabilities.

The budget for fiscal 2010, including operations in Iraq and Afghanistan previously treated as special appropriations off the budget, is $663.7 billion. In fact, in absolute terms, the budget is not changing much, although the upward spiral in costs for new weapons has come to an end. Gates requested $11 billion to increase Army and Marine ground forces and tactical systems that clearly contribute to current war operations and basic war-fighting capabilities. He has not shied away from buying large numbers of effective weapon systems, especially those with multiple applications. “We must look more to the 80 percent multi-service solution that can be produced on time, on budget, and in significant numbers,” Gates said, adding, “As Stalin once said, ‘Quantity has a quality all of its own.’” The same immediate framework applies to high-technology system development.

For example, Al Qaeda and other Muslim extremist groups have no air force, and other possible adversaries have no aircraft comparable to or better than U.S. Air Force F-15s, F-16s and Navy and Marine F-18s, and no such fighters are in development today. Therefore, Gates recommended termination of the F-22 Raptor air superiority fighter program (“a plane without an enemy”), limiting the fleet to 187 aircraft instead of the original order of 750. On the other hand, Gates affirmed continuation of the Joint Strike Fighter, the F-35 Lightning II, that will handle attack missions for the Air Force, Navy and Marine Corps. The F-35’s stealth and advanced capabilities are necessary to counter improved air defense systems available to many armed forces.

In the same vein, Gates called for cutbacks and restructuring in the Army’s FCS (Future Combat Systems) program, most of which focus on the combat vehicles forming the foundation of this complex development effort. Gates raised concerns about the applicability of the FCS concept, originally conceived for large-scale conventional combat operations, not counter-insurgencies and improvised roadside bombs. Again, Al Qaeda has no tanks or infantry fighting vehicles, except for damaged or outmoded platforms they may have captured. When the U.S. first began operations in Afghanistan, Special Operations handled many missions, and fire support came from strike aircraft, attack helicopters and missile-carrying UAVs (unmanned aerial vehicles). American forces have not takes a self-propelled artillery tube into battle for some time.

Gates applied similar common-sense constraints to other weapon procurement programs. For example, he cancelled the Air Force’s CSAR (combat search and rescue) helicopter. Although the HH-50 Pave Hawk helicopters CSAR was slated to replace are worn out and need replacement, Gates decided a new helicopter is unnecessary. The last U.S. pilot shot down in combat and picked up behind enemy lines was Air Force Captain Scott O’Grady, who ejected from his F-16 after a missile hit his aircraft over Bosnia in 1995. Clearly such instances are rare, and will be even more unlikely in the future as UAVs (unmanned aerial vehicles) shoulder the burden of more aerial combat missions. At the same time, the U.S. is fielding alternative platforms, notably the V-22 Osprey tiltrotor, far more capable than a conventional helicopter for CSAR. Other Air Force programs facing termination or delay are the VH-71 Presidential helicopter, the C-17 transport, capped at 205 aircraft, the KC-X aerial tanker that Gates ended while serving as President Bush’s defense chief in 2008, and a variety of costly and ineffective missile defense programs such as Airborne Laser, although some will enjoy increased funding. 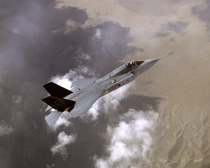 The new defense budget is not cast in stone. Gates’ proposals must pass muster in Congress, and these elected officials frequently countermand Defense Department edicts to protect programs—and jobs—in their districts and states and continue funding against administration wishes. Gates is not overly concerned, however, about purely political concerns, noting, “I, frankly, decided that I would not take the political issues associated with any of these programs into account; I would just do what I thought was best for the country.” Given the nation’s parlous economy, the probability of a successful defense restructuring that reduces long-run expenses may be significantly better than in the past.

Virginia Senator Jim Webb, a former Navy Secretary and Senate Armed Services Committee member, called Gates’ budget recommendations “highly unorthodox,” adding, “Such a major shift toward a ‘different strategic direction’ early in a new administration normally flows from such strategy-driven assessments as the Quadrennial Defense Review (QDR) or the formulation of a new U.S. national security strategy.” Not surprisingly, Webb’s concerns center on the Navy and the need for more ships, “especially … in the Pacific region, where China is pursuing a rapid, comprehensive modernization of its armed forces, including its Navy.”

Despite Webb’s concerns, however, Gates, who holds a doctorate in Soviet studies from Georgetown and spent most of his career in the CIA and the defense establishment, did not come up with his budget proposals without considered thought. It remains to be seen if his revolutionary proposals to cut through defense costs will lead to revolutionary policy implementation.