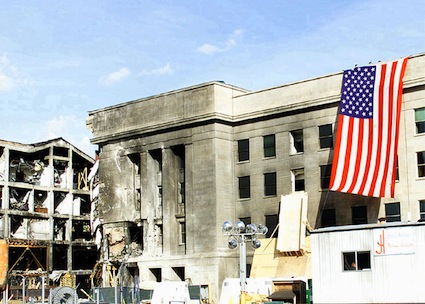 The Skies
On American Flight 11, Flight Attendant Betty Ong’s phone call should always be remembered for her poise and professionalism as she recounted what happened on the plane and as it descended rapidly and headed into the North Tower. Her voice never rose—she just said, “We are getting low, way to low”— then the call went dead as the terrorists crashed the plane into the North Tower.

On United 175, Captain Victor Saracini’s last transmission to New York Air Traffic Control was that he heard something suspicious during takeoff in Boston, most likely the struggle on American 11 as the terrorists highjacked that plane. Capt. Saracini didn’t flinch and gave our nation its first warning that it was being attacked. His naval training kept him on task, not knowing that only moments later, he too would become a victim of the terrorists.

On United 93, the revolt of the passengers gets praise as the “first battle.” We can’t forget, though, that the pilot Capt. Jason Dahl and First Officer Leroy Homer disengaged some critical flight instrumentation, which is largely credited with making United 93 so difficult for the terrorists to fly. Those pilots “gave some” before they “gave all.”

On American 77, while the terrorists took control, two young children, Zoe and Dana Falkenberg (8 and 3 years old, respectively) without completely understanding, sat helpless as the terrorists inflicted their plan. Others can only imagine how these children’s parents, Charles Falkenberg and his wife Leslie Whittington, mustered the courage to keep their children calm, and like most parents, explain away the evil transpiring to their daughters’ questions of “Mommy, what’s going on?”
On every flight, those proud Americans gave all.

Tom Armas and John Buckley, federal law enforcement officers, “gave some” as they responded to the emergency and ran into the WTC complex, climbing 40 stories into the North Tower—Tom in gym shorts and a t-shirt. They helped evacuate many people and ended up trapped in the North Tower’s lobby area, after the South Tower collapsed, and had to egress out via a hole.

Lee Ielpi, a New York City firefighter whose son, Jonathan, was also a New York firefighter from Squad 288 in Queens, answered the call and responded to the Towers just after the attack. Jonathan entered the South Tower to rescue those inside and never made it out. Three months later, his father, Lee, who spent nine months at the site helping recover the remains of the lost, removed the body of his beloved son from the Tower wreckage. Jonathan and his father both gave all.

PAPD Officer George Howard, home on a day off, responded to work and rushed into the Trade Center. As he did, falling debris fell on him. George was eventually recovered, and his badge, a symbol of determination, was given to President George W. Bush by his family to help the President and nation remember that George gave all.

The Pentagon
As the terrorists circled D.C., trying to find a target, those in the city were still largely unaware of what was happening. Many in our nation’s command structure were still trying to grasp and deal with the fast moving events. As American Flight 77 circled, our top brass were about to have the battle brought to their front door.

After the plane crashed into the Pentagon, caving in several stories of its protective structure, Lt. Col. Ted Anderson grabbed two injured personnel and carried them away from the burning building. He re-entered the smoke-filled Pentagon through a broken window and dragged out two more injured people, one whose clothes were on fire. Lt. Col. Anderson had been quoted in an Army Times article as saying, “You don’t leave your comrades on the battlefield. To me, this was the battlefield.”

Staff Sgt. Christopher Braman, a cook at the Pentagon, and a Ranger at heart, went back inside the burning Pentagon and found a trapped Sheila Moody who was clapping her hands, hoping someone would hear her. She couldn’t speak because of intense smoke inhalation. Braman found her and carried her out.

Braman continued going into the Pentagon and recovered a number of casualties. He also stayed all night. He received the Purple Heart for his injuries, and the Soldier’s Medal for his bravery.

Both those warriors “gave some” and many of the comrades “gave all” in a battle that they didn’t expect or were prepared for.

Memorials
It’s often been said that the loss of a loved one leaves a hole in the soul that can never be filled, especially when that loss comes via a tragedy.

For the 10 year anniversary, we must remember and make it a point to tell the stories and teach the future how individual acts of selfless service, compassion and bravery answered that call.

In some places, those stories are being turned into fixed tributes for generations to come and learn. The Pentagon memorial is a series of benches with the names of each of the 184 individuals that perished, arranged by age, from the youngest to the oldest. The youngest was Dana Falkenberg, who was only 3 years old when she was murdered.

At Ground Zero, a Tribute Center is up and operational. Lee Ielpi works there, alongside one of its prized exhibits, his son Jonathan’s FDNY turn-out coat, recovered from the ruble on Jonathan.

In Shanksville, the gaping hole created when United 93 crashed into the earth at over 500 mph still draws thousands of people. In a little town in Bucks County, Pennsylvania, that states’ official 9/11 memorial, called the 9/11 Memorial Garden of Reflection, memorializes all the victims from the September 11th attacks. Most poignant: it has 42 lights—each one for a child that lost a parent from Pennsylvania during the attacks.

In total, 2,977 Americans “gave all” and thousands “gave some” during the attacks. Each should be honored and all should be remembered. For more information about the 9/11 memorials, please visit www.pentagonmemorial.org, www.tributewtc.org, www.flight93memorialproject.org and www.9-11memorialgarden.org.

A view of the damaged west wall of the Pentagon Building in Washington, D.C.,…