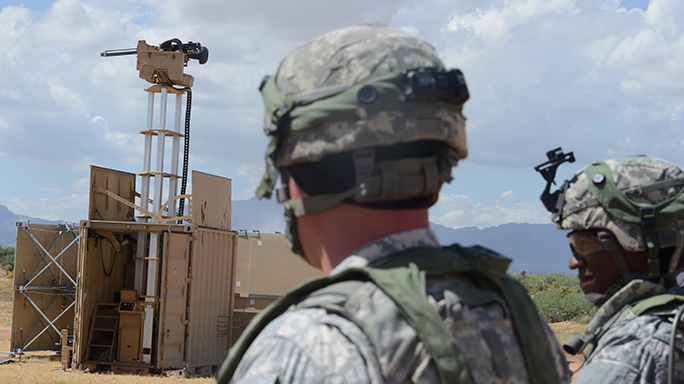 Remotely controlled weapons systems have drastically reduced the number of Soldiers needed for perimeter security at an expeditionary base camp at Fort Bliss, Texas.

“Every Soldier I have assigned to securing the perimeter is one I don’t have that can execute support missions,” said Lt. Col. Raphael Heflin, commander, 142nd Combat Service Support Battalion, or CSSB, 1st Armored Division.

At a conventional combat outpost, it takes four to six Soldiers doing eight- or 12-hour shifts to man one weapons system on the perimeter, he said.

Using relatively new remote control weapons systems, he said, pointing to a series of unmanned, weaponized towers at the edge of the razor wire, two Soldiers inside the base camp tactical operation center can do the security work once done by 10.

The 142nd CSSB is among the many Army and other military service units – along with a 14-member coalition from mostly NATO nations – participating in Network Integration Evaluation 16.1, also called an NIE. The evaluation runs from Sept. 25 to Oct. 8. In all, about 9,000 participants are evaluating new and emerging network solutions.

The systems, including the expeditionary towers atop which they’re mounted, are known as containerized weapons systems, he said.

One expeditionary tower “can be put together by six Soldiers in less than an hour, with minimal training,” Scott said. When it’s time to pack up and leave, everything fits neatly back inside the container.

While just about any gun system can be mounted on the tower, the two Scott pointed out were fitted with a Browning M-2 50-caliber machine gun and a 338 Lapua sniper rifle.

The weapons can be raised, lowered, rotated by 360-degrees and fired remotely, he said.

Scott introduced the operators who ran the systems. They sat inside a container with multiple large screens in front of them. To control the weapons, they used software called the Joint All Hazard Command Control System, which Scott said serves as the brains of the “Tower Hawk System.”

On their screens were views outside the perimeter, including normal video feeds as well as thermal and infrared views. Scott said that the weapons systems are even more effective at night. “Anything moving at night we see long before they see us,” he said, adding that “they” refers to the bad guys.

The system even differentiates between good and bad guys. Once the enemy is detected, the system plots coordinates, allowing the operator to take out the target, be it personnel or vehicles.

Heflin said the remote weapons system is one of two main things that his Soldiers are evaluating during NIE 16.1. The other is a variety of operational energy systems designed to reduce energy consumption, which, he said, translates to less fuel and water needed and fewer convoys.

Maj. Daniel Rodriguez, company commander, 542nd Quartermaster Company, a Reserve unit out of Erie, Pennsylvania, showed some of the 11 systems being assessed.

The Advanced Medium Mobile Power Source, or “amps micro grid,” controls six 60-kilowatt generators, he said. It’s a smart system that detects how much power the base camp is consuming.

When there is not enough power, the system turns on more generators, he said. When they’re not needed, the system automatically turns off one or more generators. The system also determines which generator has been used the most and selects a fresh one to give the used one a rest. A light comes on when service or maintenance needs to be done as well.

Conventional generator setups, on the other hand, require generators to be running all the time, thereby consuming a lot more fuel, he said.

Rodriguez then showed a “Water From Air System” trailer. Inside were components that acted sort of like a dehumidifier, sucking water from the outside air and converting it into water clean enough to drink, he said.

The Water From Air System produces 4.5 gallons of water for each gallon of fuel it consumes, he said. It yields up to 15 gallons of water every 40 minutes, for up to 500 gallons a day. Even at 10 percent humidity, it works.

Also being evaluated by Rodriguez and his team was a black-water purifier that uses bacteria to break down sewage into water clean enough to be discharged safely into the environment. One system can treat 3,500 gallons per day.

The team is also evaluating a gray-water recovery system that ingests used shower and sink water and recovers 75 percent for reuse.

The expeditionary base camp consisted of 15 billeting containers, each capable of housing 10 Soldiers. Each container had two latrines, a laundry area and two showers. An additional two containers housed the tactical operations center. All containers were air conditioned.

Heflin said that Soldiers who’ve been on exercises appreciate the living conditions here. On the other hand, “I’ve got a few new Soldiers here who’ve never been in field. Next time they go to the field they’ll be disappointed.”

“My wife back in Pennsylvania seems to think I’m on vacation, living in such cozy conditions,” said Staff Sgt. James Clarke, from the 563rd Quartermaster Company. 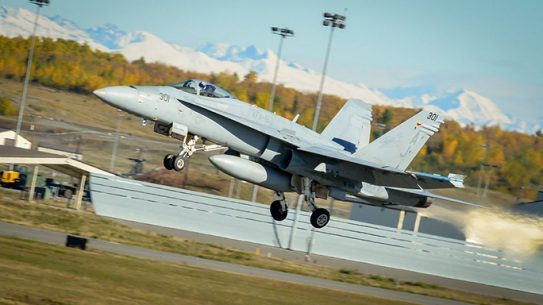