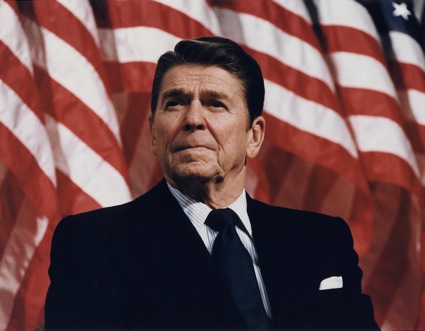 President Ronald Reagan’s assassination attempt gave him a unique perspective on the sacrifices of federal law enforcement officers. Two years later on March 14, 1983, he paid homage to federal officers at a memorial service held at the Department of Justice. Here’s that speech:

Two years ago, I saw close up, very close up, two profiles of courage. Were it not for the brave efforts of Secret Service Agents Jerry Parr and Tim McCarthy, I might not be speaking to you here today.

Jerry realized before I did what was going on and literally threw me into a waiting car. Tim deliberately took a bullet that was intended for me.

Fortunately neither of these Federal officers nor Washington Patrolman Thomas Delahanty nor my own Press Secretary, Jim Brady, lost their lives that day near the Hilton, although three of these men suffered severe injury.

While serving their fellow citizens, however, other law enforcement officers, as we’ve been told today, have lost their lives. In recent months alone, no fewer, as you’ve been told, than 13 Federal agents have been killed while on the job. Their deaths remind us again of the difficult and the very hazardous tasks that we ask our Federal law enforcement officers to carry out. Sometimes they must perform these duties in unfamiliar surroundings, sometimes must deal at close hand with the most destructive and unpredictable elements in our society. Frequently, their work is as routine as anyone else’s. But they know, without a doubt, that someday, perhaps today, they may face danger and, perhaps, even tragedy.

Just 9 days ago, tragedy did occur with the three Secret Service agents who died in that head-on collision on a mountain road in California. George Patrick LaBarge, Donald W. Robinson, and Donald Bejcek died performing their professional duties. They were driving to Yosemite National Park, where they were to provide protection for Queen Elizabeth.

It’s beyond our understanding, or certainly we’re not allowed to know, just why these things happen, why these men should have been riding at that moment in that car, just as it eludes our understanding why four FBI agents should be in a plane that crashed outside of Cincinnati, Ohio, on December 16th. Robert W. Conners, Charles L. Ellington, Terry B. Hereford, and Michael J. Lynch died in the worst accident in FBI history. They, too, were faithfully doing their job. They were in search of embezzled money that was supposedly buried near Cincinnati.

Accounts of homicides so frequently are in the newspapers and the nightly news that they almost seem commonplace. But no murder is commonplace. When the victim is a law enforcement officer, there’s an added dimension. Here, the assault is perpetrated not only against an innocent individual but also against the society he represents and is solemnly sworn to protect.

U.S. Marshals Kenneth Muir and Robert Cheshire were shot to death February 13th outside Medina, North Dakota, where they were attempting to serve a warrant on a man violating his probation on a tax evasion conviction. Correctional Officer Gary Lee Rowe was responding February 7th to an alert of a possible escape attempt when inmates in a Federal prison in San Diego fatally attacked him with an arsenal of homemade, metal weapons. Correctional Officer Gregory Johnnie Gunter lost his life on — of all days — Christmas, when despite being off duty, he attempted to settle a dispute between two angry mobs of prisoners in the Federal penal institution at Petersburg, Virginia.

Alcohol, Tobacco and Firearms Agent Ariel Rios, as the Secretary told us — shot and killed December 2d in Miami while working undercover on a cocaine investigation. And Thomas J. Devine of the Drug Enforcement Administration — shot in the leg and the base of the neck October 12th, 1972, by a suspect in an undercover narcotics investigation — died from his wounds September 25, 1982.

It’s wisely said that nothing worth having comes cheaply or easily. And the price of a free nation is sometimes counted in the dearest currency: human life. These 13 men, all the best of professionals, were dedicated Americans. They gave their lives in a continuing battle to preserve the domestic peace and to make America safe from those who would prey on the innocent.

Our approach must be one of great appreciation for their work and their lives, and it’s only imperfectly expressed by the gathering here today. The family members of each of these men bear a unique burden. It’s my wish that they will find solace in the loyalty and support and friendship of the professionals their loved ones worked with and in the respect and gratitude of our citizens for the job they did.

Finally, I hope and pray that all Americans will be inspired by the knowledge that each of these men died as few men do — a hero. Someone had said once that “a hero is no braver than anyone else; he’s just brave 5 minutes longer.” But the men we’re talking about today are brave every minute, every hour around the clock, and have chosen that path of courage for their lives. And what of the heroism of those who share those lives and who know the possibility that each day holds?

If you’d permit me to just tell a little personal story where, perhaps, I got my first realization of this heroism.

Several years ago while I was still Governor of California, after a tragic assassination in our country, Secret Service were assigned to several of us in public office. And on weekends, when I could, I liked to get to the ranch and sometimes do a little target shooting and plinking at tin cans. And they liked to keep their hand in, too. So, together, those men and myself, we’d go down in the woods and do some target shooting.

And one day I mentioned that I had read an article on shooting from the hip. And they said, “Oh, yes, we have to do that.” And one of them set a tin can up and I went into a crouch, as the article had said, and I blazed away and the can was entirely untouched. And then one of them stepped up and, standing erect, took his turn. And I said, “Well, wait a minute. You didn’t crouch. The article said that you go into a crouch.” And he sort of pebble-pushed there for a minute. He didn’t know quite how to answer me, and he said, “Well. . . .” Finally he mumbled, “We lose our rating if we crouch.” And I said, “Well, I don’t understand. The article said . . ., and so forth. And the unit chief that day took me off the spot, or him off the spot, when he said to me, “Governor, if we’re ever shooting at anyone, we’re between him and his target.” It was quite an awakening.

I think all of us should give thanks to God that there are men in this society of ours who are willing to take these jobs.