Ronda Rousey is currently one of the biggest names in the world.

Rousey is the most dominant fighter in women’s UFC history, amassing a record of 12-0 with just one of her fights making it out of the first round.

To go along with that impressive record, Rousey has also caught the eyes of men around the world with her beauty, so it’s easy to see 22-year-old Marine Jarrod Haschert invited the UFC champ to the upcoming Marine Corps Ball.

Stationed out of Camp Lejeune, N.C., Haschert originally took to Facebook with his video, where it collected more than four million views.

“You are my celebrity crush,” Haschert said in the video. “I love everything you do and I think that you are a phenomenal person, which is why it would be my honor to take you to the Marine Corps Ball on Dec. 11.”

The only problem was at the time the video was filmed, Rousey was scheduled to be training for a fight on Jan. 2, making it impossible to get to the ball. However, as fate would have it, the fight was moved up to Nov. 14, clearing up Rousey’s December schedule.

TMZ caught up with Rousey Tuesday when the UFC champ said she would absolutely join Haschert at the Marine Corps Ball.

Shouldn’t be a problem for the Marine, but there is one catch: Rousey said Haschert needs to find dates for her three friends.

“He’s needs to find dates for my girls and then we’ll all go, that’s the deal,” Rousey said. 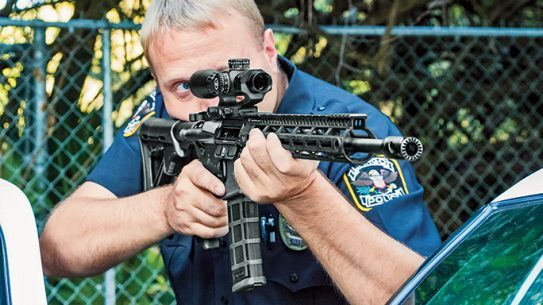 New mid-length lightweight weighs less than 6 pounds but will still shoot with the...