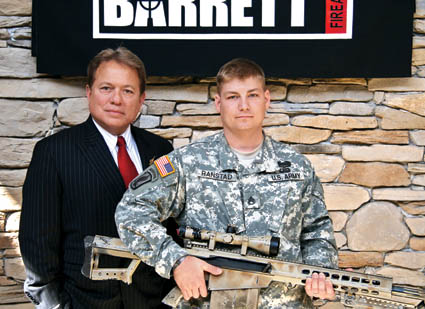 Barrett with Sgt. Nick Ranstad, who used an M107 to earn the U.S. Army record for a long-distance kill—over 1.3 miles away.

Founder and President of Barrett Firearms, and designer of the first commercial .50 caliber rifle, Ronnie Barrett was born in Murfreesboro, TN, in 1954 and graduated from Murfreesboro Central High School. He started a career as a professional photographer in 1972. By 1982, he owned his own photography studio. Long a gun enthusiast, Barrett was photographing a river-patrol gunboat on the Stones River near Nashville, TN, when he captured an award-winning picture that piqued his interest in the .50-caliber cartridge—thanks to two Browning M2 machine guns mounted on that boat.

At that time, .50 BMG shooters were few, just those lucky enough to have scored a suitable surplus WWII rifle and have it re-barreled in .50 BMG. And far between: there were not enough to support organized matches. But Barrett reasoned that if shooting a .50 intrigued him, lots of other shooters would be as well. No doubt, he was correct!

As he noted in an interview in the Nashville Business Journal, “I was a professional photographer and artist who wanted to create a shoulder-fired rifle that would chamber the amazing .50-caliber cartridge. I had no prior experience in manufacturing or as an engineer. But I knew what I wanted. So, I hand-drew the design for what was to become the Barrett rifle.

“When I took those drawings to machine shops for help, instead of getting encouragement, they laughed at my ideas. Not to be discouraged, I just did it anyway. The idea was born on my dining room table when I made the drawings, and then the original Barrett rifle was made in a gravel-floor garage. It has turned into a world-class manufacturing company doing business around the globe.”

“World-class” may actually be a little modest when you consider the time frames in which this was accomplished, both the prototype and the speed with which he built a world-class, multi-faceted manufacturing organization.

Although most local ironmongers told him that if his idea was any good, someone smarter would have already designed it, a few days later, Bob Mitchell, a tool and die maker and machinist in Smyrna, agreed to help. After their day jobs, the men would work on Barrett’s ideas, sometimes laboring through the night in Barrett’s one-car garage using a small mill and lathe. Barrett also found support from a sheet-metal fabricator who allowed him to visit the owner’s shop and work directly with one employee, Harry Watson. The resulting gun was the shoulder-fired Barrett .50 BMG rifle, which was taken from paper concept to firing model in less than four months.

While fine-tuning the first prototype rifle, Barrett began designing a second prototype that featured an improved exterior aesthetic and other refinements shown desirable on the first gun. He made a video of the first prototype being fired, then prepared the second prototype as a display model and put it on his table at a Houston gun show. Three customers plunked down deposits. With limited capital, Barrett set up a small shop in his garage. He built an initial batch of 30 rifles, this being how many he could store in the two wooden gun racks he made over at his father’s cabinet shop.

Using hand-drawn art of the new rifle, he ran an ad in Shotgun News and the first batch didn’t last long, so he began to ramp up production. Barrett was contacted by the alert procurement folks over at Langley, who purchased a number of rifles for the Afghan Mujahideen, at the time our surrogates in the war against the then-occupying former Soviet Union in Afghanistan.

Barrett was spot-on in his judgment that he would not be the only one who wanted a .50 BMG rifle. There must have been a great deal of pent-up interest among shooters and aficionados who were growing tired of trying to find a Russian PTRD, or English Boyes or a similar surplus rifle to re-barrel so they could shoot .50 ammunition. Once Ronnie Barrett broke trail, many other makers in the U.S. and overseas have followed suit, and .50 shooting has become a mainstream genre of target shooting.

As the company grew and his progeny graduated from school, both Barrett’s son Christopher and daughter Angela assumed roles in the company. Chris brought modernization and technology into the manufacturing. Angela joined the team to launch a marketing and advertising department, which up to that point had not been established.

The M82 was used in Desert Storm in the early 1990s when Schwarzkopf’s troops swept the trash out of Kuwait. Based on what the rifle could do, it was officially adopted by the U.S. Army in 2002 as the M107.
Ronnie and Chris Barrett worked jointly on the Model 98 semi-automatic design, and the Model 98B and Model 99 bolt guns.

Despite great success and exponential growth, Barrett is still a family-owned-and-operated company specializing in high performance rifle systems and accessories.

Barrett now manufactures piston-driven AR-type rifles, and their famous big-bore beauties in a range of calibers and configurations, plus specialty ammunition and leading-edge computerized optics and accessories. They have developed a lightweight version of the M240 belt-fed by using leading-edge CNC machining. They have taken satellite phone calls from Leathernecks under fire in Afghanistan needing advice on field-expedient repairs. They have supplied some 73 allied/friendly militaries worldwide. And Barrett is not done yet.

The big hits keep coming! In 2004, Ronnie Barrett was honored with the Colonel George Chinn Award. In 2005, the U.S. Army recognized the Barrett M107 as one of the top 10 greatest inventions. In June of 2006, Barrett was awarded the Ernst & Young Entrepreneur of the Year Award for “turning his idea into one of America’s most successful companies.”

An exemplar of an early Barrett rifle was obtained by the Tennessee State Museum and is on display, along with artifacts such as Col. Alvin York’s Medal of Honor.

Barrett now serves on the Board of Direc­­­tors of the NRA, elected in a landslide. A gun enthusiast for almost all his life, he has been an advocate for the Second Amendment for many years, on radio, television, and quoted by the magazine press.

Barrett’s Second Amendment activism is based on principle and comes well ahead of sales. When California outlawed civilian sales of .50 rifles—bearing in mind that one of Barrett’s .50s is yet to be used in a crime—Barrett shut off all sales of his rifles to California, including all agencies and even repair of their existing Barretts. This played well among the troops: he received thousands of letters of support from rank and file cops and shooters in the Golden State. 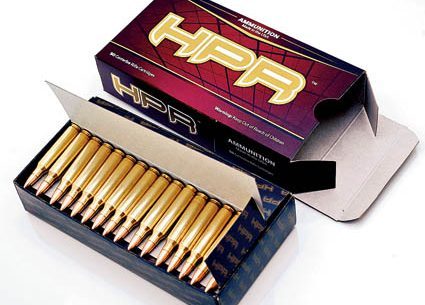