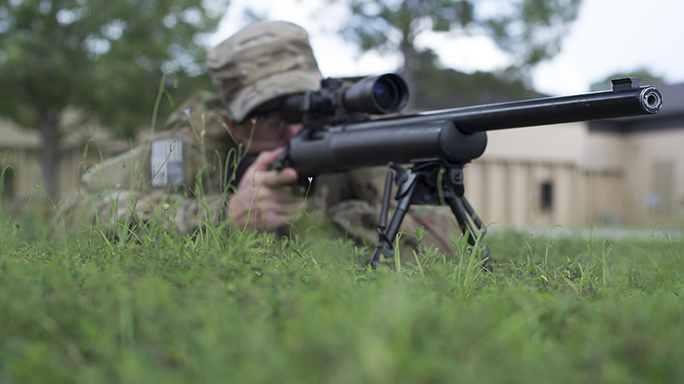 The following is a release from the 23rd Wing Public Affairs Office:

He shivered in below-freezing temperatures, as pouring rain seeped through his muddied uniform. Clouds blanketed the night sky, casting a darkness difficult to defeat. Even with night vision technology, it was hard to see past his rifle.

As his mind wandered to his hunger and lack of sleep, the sniper turned his thoughts back to the mission at hand. Staff Sgt. Joseph Crotty, the 822d Base Defense Squadron NCO in charge of standards and evaluations, would have to stay focused to get through this training.

Crotty and Senior Airman Phillip Hopkins, the 822nd Base Defense Squadron fireteam leader, both endured this scenario and many others during the Royal Air Force’s Basic Sniper Course. The intense nine-week training allowed the Airmen, who both have already been through the U.S. Air Force’s Sniper Certification Program, to further develop in-depth knowledge of their specialty.

“The RAF sniper school is one of the toughest schools we send Airmen to, but it is not just about shooting,” said Col. Michael Ross, the 820th Base Defense Group commander. “It trains endurance, field craft and observation skills, too. Our Airmen deploy to a wide spectrum of environments, many of which require the ability to gather information from covert observation posts located outside the base perimeter. The RAF sniper course is a phenomenal venue to sharpen the skills needed to accomplish that mission.”

Ross said that the course was grueling in both the mental and physical aspects of training, and Hopkins agreed.

“It was a very arduous course,” Hopkins said. “It’s probably one of the hardest things I’ve done in my life, but it’s also the best training I’ve done in my life. They expand upon (what we already knew) and broke it down to where we really got into detail with what we were doing. Everything we did was so minute and everything you learn is just brilliant.”

Many people may believe that a sniper training course would focus on expertly firing a weapon, but RAF’s sniper course went far beyond that, teaching an array of skills to the Airmen.

“Everybody says it’s all about the shooting,” Crotty said. “But that’s a very cliché, one-sided way of thinking about what we do. They don’t see the training that we get to observe and pick out the little things.”

Hopkins said the snipers learned to act as force multipliers on the battlefield by observing from afar without being detected and relaying that information to their team.

“I can see what (the enemy) is doing before they complete their task. I know what they’re going to do before they do it. I can be anywhere and they’re not going to know I’m there.” Hopkins said.

In order to hone their intelligence gathering and observational skills, the pair learned land navigation, map and photograph reading, stalking, camouflage and concealment over the weeks.

“You learn so much at the school,” Hopkins said. “Essentially, it made me a better observer and reconnaissance expert so I can bring those skills wherever we go. I have a different view of things now, so it changes my perspective.”

Crotty and Hopkins are two of the few Americans to further their sniper proficiency through the basic sniper course.

“It’s pretty rare,” Crotty said. “It’s definitely a once-in-a-lifetime opportunity, and two of us from the 820th (BDG) got to go.”

Crotty and Hopkins went back to their respective squadrons with a wealth of knowledge they were able to share with fellow Airmen. Sharing ideas, techniques and perspectives is part of how close precision engagement is learned.

“When our Airmen come back from that course, they also bring with them another perspective on how to do the job we do … base defense,” Ross said. “They share this other way of looking at things with the rest of the group, improving the tools we need when we deploy.”

The pair expects to continue the cycle of learning and teaching that is characteristic of their career.

“It is a continuing trade,” Crotty said. “You never get enough training when it comes to long-range precision rifle fire. I’ve been consistently honing my skills from new people and every year accomplish the tasks to maintain my certification.”

Even if his training as a sniper is never done, Hopkins said he believes attending the basic sniper course will remain a highlight of his time on active duty.

“As far as training goes, it’s the best training I’ve had in my career and it’ll probably be one of the pinnacles of my Air Force career,” Hopkins said.

According to Ross, the bottom line is that they get the best training possible for the 820th BDG Airmen to protect the Air Force’s people and assets better than anyone on the planet. 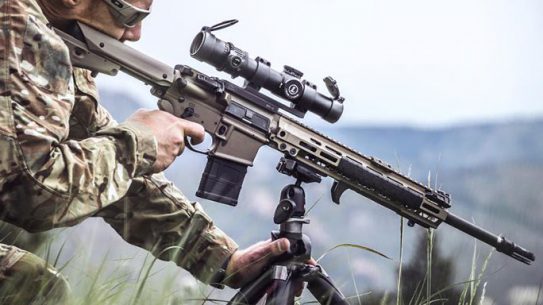