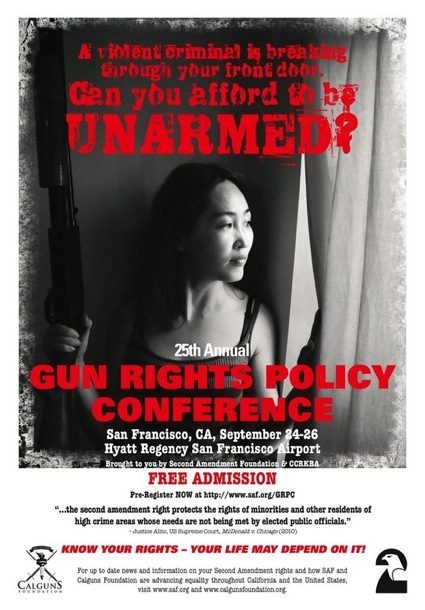 Last month, SF Weekly broke the story that Muni forced the guns to be edited out of the poster for The Other Guys — as depicting Mark Wahlberg and Will Ferrell with handguns would violate the transit agency’s policy against ads that “appear to promote the use of firearms.”

The incredibly litigious gun-rights advocates at the Second Amendment Foundation read that article. Then they sent Muni specs for an ad promoting their forthcoming “Gun Rights Policy Conference” in San Francisco, featuring an image of a woman brandishing a large shotgun and the text “can you afford to be unarmed?” — which, one would have to concede, goes a long way toward appearing to “promote the use of firearms.”

Yet Muni has accepted the ads, and 16 of them went up yesterday on bus shelters throughout the city.

Alan Gottlieb, the executive vice president of the Washington-based Second Amendment Foundation, said his group was rankled to learn of Muni’s prohibition against firearm-promoting ads. “We read that story, so we decided to push the limit and see if they’d take ours,” he said.

Much to his surprise, Muni did take the ads, despite their clear promotion of the use of firearms. “We gave it to them thinking it was going to be rejected. And we were quite ready to go to court,” he says. Gottlieb notes that he never made threats about suing the San Francisco Municipal Transportation Authority — but, then again, he doesn’t have to. The Second Amendment Foundation has twice successfully sued to overturn San Francisco gun bans — first in 1982 and, most recently in 2005. The group also sued to overturn bans on guns in city public housing complexes. “So, they pretty much knew we were going to litigate,” sums up Gottlieb.

Last month, SF Weekly broke the story that Muni forced the guns to be…