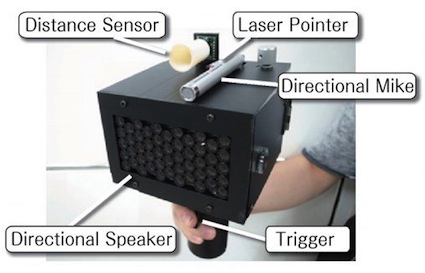 From Cornell University:
In this paper we report on a system, “SpeechJammer”, which can be used to disturb people’s speech. In general, human speech is jammed by giving back to the speakers their own utterances at a delay of a few hundred milliseconds. This effect can disturb people without any physical discomfort, and disappears immediately by stop speaking. Furthermore, this effect does not involve anyone but the speaker. We utilize this phenomenon and implemented two prototype versions by combining a direction-sensitive microphone and a direction-sensitive speaker, enabling the speech of a specific person to be disturbed. We discuss practical application scenarios of the system, such as facilitating and controlling discussions. Finally, we argue what system parameters should be examined in detail in future formal studies based on the lessons learned from our preliminary study.

The gun operates based on the concept of delayed auditory feedback. An attached microphone picks up the sound being made by the target and plays it back 0.2 seconds later. The effect is incredibly confusing to the human brain, making it all but impossible to talk or hold a conversation. The device doesn’t cause the person it’s being used on any physical harm — it simply messes with their head.

When the human brain hears its own speech perfectly in sync during normal speech, it easily processes the input and allows you to largely ignore the sound of your own voice. However, by offsetting the response just a bit, the brain hears your mouth speaking as well as the strange echo effect produced by the gun. This unusual combination is confusing enough to effectively shut down the part of your brain responsible for managing speech, and you fall immediately silent.

The free speech implications of the speech jammer are somewhat disconcerting: A protestor or speaker at a political rally could be easily silenced just for having unpopular views. Political rallies and other protest gatherings could easily be quieted by the strange gun, should law enforcement or other agencies decide to equip themselves with the technology.

Source: Tecca for Today in Tech. 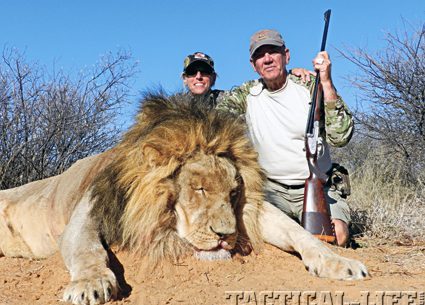 From Cornell University: In this paper we report on a system, "SpeechJammer", which can…