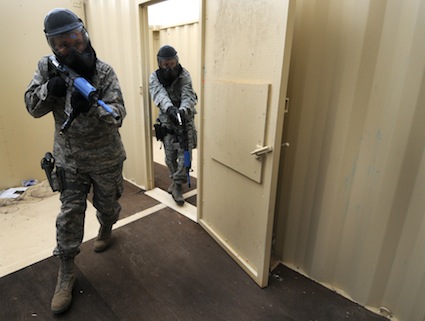 Every emergency scenario requires having a plan, including an active-shooter scenario. The 50th Space Wing Antiterrorism office, 50th Security Forces Squadron and the 50th Civil Engineer Squadron Emergency Management Flight recently issued guidance on how to survive an active-shooter incident.

According to the Federal Emergency Management Agency, an active shooter is an individual actively engaged in killing or attempting to kill people in a confined and/or populated area. In most cases, active shooters use firearms and there is no pattern or method to their selection of victims. Active shooter situations are typically unpredictable and can evolve quickly.

“The active shooter phenomenon represents a significant change in criminal methodology, and has in turn required a significant change in tactics for both responders and potential victims,” said Lt. Col. Jasin Cooley, 50 SFS commander. “In decades past, bystanders were only a tool for acquiring another target, now they are the target. With this in mind, escape and compartmentalization need to be the primary motivation of bystanders. Everyone should have a plan for escape, and assist others if forced to escape.”

How individuals respond to an active shooter will be dictated by the specific circumstances of the encounter, bearing in mind there could be more than one shooter involved in the same situation.

“As active-shooter scenarios become more and more prevalent, people need to realize that it can happen to them at any time,” said Lou Fischer, 50th Space Wing antiterrorism officer. “Now is the time to think about it, not when the crisis is happening. ”