The Fourth Amendment guarantees our right to not be subjected to search and seizure under a “general” search warrant (i.e., a warrant not based on probable cause and not particularly describing the place to be searched and the person or thing to be seized).

Firearms are generally lawful to possess, and usually may not be seized without probable cause that a specific firearm was used in a crime. On August 24, 2010, the Ninth Circuit Court of Appeals in Millender v. County of Los Angeles, et al. (07-55518), confirmed that a general search warrant requesting the seizure of “all handguns, rifles or shotguns of any caliber, or any firearms capable of firing ammunition…” was unconstitutional when the police who sought the warrant were aware they were actually searching for just one specific firearm.

The National Rifle Association (NRA) and the California Rifle and Pistol Association Foundation (CRPAF) argued this point in an amicus (friend of the court) brief filed in the Ninth Circuit Court of Appeals on behalf of the Mrs. Millender. A copy of the brief, along with the opinion, other case related briefs, and memorandum analyzing the opinion is posted at http://michellawyers.com/millendervlosangeles.

Following the Ninth Circuit’s Millender decision, defendant County of Los Angeles sought review by the United States Supreme Court. On June 27, 2011, the Supreme Court agreed to review the case, and to address the question of whether law enforcement is entitled to qualified immunity against a civil rights law suit when a judge has signed off on the warrant – even when the officers seized property (i.e. firearms) unrelated to the case (and the specific firearm) they are investigating. The case will be heard by the Supreme Court next year. NRA and CRPAF will weigh-in again through an amicus brief at that time.

Far too often police seize entire firearms collections even when most of those firearms are not alleged as part of any criminal offense. In fact, to get to large gun collections local police even resort to “stinging” gun collectors with enticing too-good-to-be-true firearm deals that often involve grey areas of the law, making inadvertent violations of the law common. Some police are politically motivated to inflate statistics of the number of guns seized in order to justify increased funding for their efforts. These seizures often result in damage to the firearms, and inevitably cost their owners expenses and legal fees to get the firearms back.

The Millender case involved a domestic assault between Mr. Bowen and Mrs. Kelly. Bowen threatened Kelly using a specifically identified sawed-off shotgun. Kelly called the police. Police ran Bowen’s record and discovered he was a felon. Police then tracked down an address purported to be Bowen’s residence, and drafted a search warrant that included a request to seize all firearms and ammunition. Police included these general requests despite having a picture of the specific sawed-off shotgun Bowen allegedly used in the assault.

At 5 a.m. the Los Angeles County Sheriff’s Department SWAT team served the warrant at the address of Bowen’s foster mother, Mrs. Millender (law enforcement knew that this was her residence, not Bowen’s). Police broke in through her front security door and a front window. Bowen was not there, but law enforcement nonetheless seized from Mrs. Millender a 12-gauge “Mossberg” shotgun with a wooden stock that looked nothing like the sawed-off shotgun they were after, along with a box of .45 caliber ammunition.

Bowen was found the following day hiding under a bed in a motel.

The District Court held that the police had qualified immunity from the damages sought in the civil rights case because of the supposed validity of the warrant.

The Ninth Circuit Court of Appeals reversed, holding that the warrant was over-broad, especially given law enforcement’s knowledge of the specific firearm Bowen used, and considering the total lack of any gang related evidence. Due to the extreme degree in which the warrant was unconstitutional, the Court of Appeals held that the officers were not entitled to qualified immunity and could be sued for damages for violating the Millenders’ civil rights. 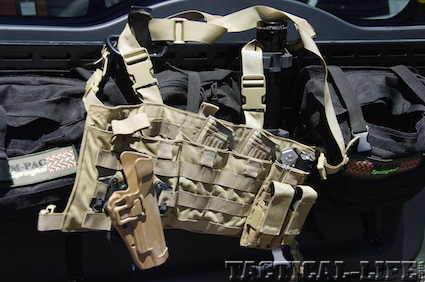