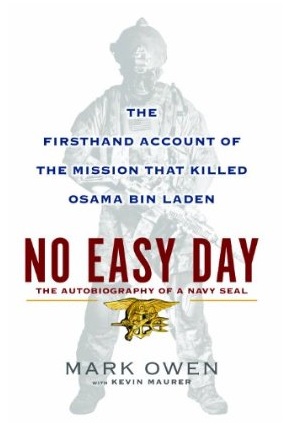 A firsthand account of the Navy SEAL raid that killed Osama bin Laden contradicts previous accounts by administration officials, raising questions as to whether the terror mastermind presented a clear threat when SEALs first fired upon him.

Bin Laden apparently was hit in the head when he looked out of his bedroom door into the top-floor hallway of his compound as SEALs rushed up a narrow stairwell in his direction, according to former Navy SEAL Matt Bissonnette, writing under the pseudonym Mark Owen in “No Easy Day.” The book is to be published next week by Penguin Group (USA)’s Dutton imprint.

Bissonnette says he was directly behind a “point man” going up the stairs in the pitch black hallway. “Less than five steps” from top of the stairs, he heard “suppressed” gunfire: “BOP. BOP.” The point man had seen a “man peeking out of the door” on the right side of the hallway.

The author writes that bin Laden ducked back into his bedroom and the SEALs followed, only to find the terrorist crumpled on the floor in a pool of blood with a hole visible on the right side of his head and two women wailing over his body.