Seattle police have released dash and body cam footage showing two of its officers opening fire on a fleeing car after the vehicle nearly ran one of them over. Watch the dramatic video above.

On Sunday, Oct. 8, officers responded to a report of a suspicious vehicle in the 2200 block of Yale Avenue East. Patch.com reports that the person who made the 911 call reported seeing people around a vehicle smoking out of a glass pipe and possibly unloading a handgun.

The first dash cam clip shows the officers pulling up to the car—a black Subaru Impreza—as one of them says “is that them right there?”

One person is standing in front of the vehicle, but he or she moves out of sight. Another person then emerges in front and slams down the hood of the car. The person then bolts back into the vehicle while the officers yell for the person to get on the ground.

Four officers are then shown running toward the car. One of them is standing directly in front of it, but the car quickly jerks forward. The movement causes the officer to move out of the way.

The Seattle Police blotter reported that the vehicle was found the following afternoon. There was no sign of the occupants, but the Seattle Times says a small amount of blood was found inside, though not an amount that would indicate serious injury.

Both officers have been placed on administrative leave and an investigation into the incident has been launched. In particular, Seattle PD is looking at whether or not the second round of gunshots constituted “criminal conduct,” and if shooting at a fleeing vehicle violated department policy, the Times says. 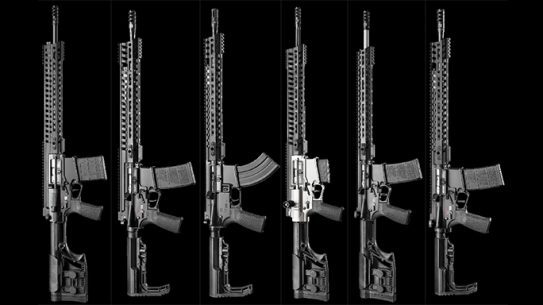 8 Patriot Ordnance Rifles Ready for Any Mission or Need

The Revolution might be getting all the buzz lately, but that doesn't mean you...